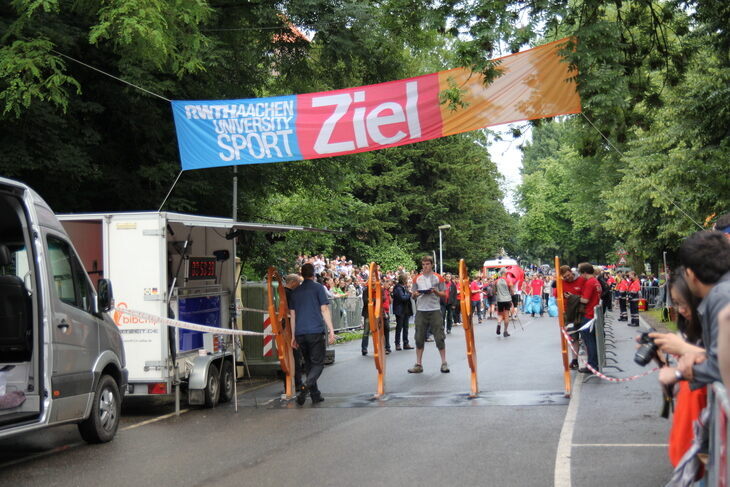 The traditional running event Lousberglauf will finally kick off at 7pm on July 5. This event is organized, as usual, by the University Sport Center of RWTH Aachen (HSZ) and the residents of the towers in Rütscher Straße.

In order to make this event as successful as every year, the city Aachen, sponsor STAWAG and the Studierendenwerk Aachen is making last preparations.

Starting in the last days, residents were informed about the street blockings and parking ban due to the Lousberglauf. The parking ban starts on Tuesday at 8am; all information is on the according signage. At Nizzaallee and Kupferstraße parking vehicels need to leave at latest 1am on the day of the event. The main part of the barriers will be offset at 8pm.

Linking Components of the Lousberglauf

All of the 2000 available starting spots are filled which represents the enthusiasm of the participants every year. Karlheinz Welthers, head of sports development department of Aachen, stresses the importance of this event for the city Aachen: “The Lousberglauf is the most important sports event of Aachen that shows attachment and identification of RWTH, FH, students and the city.”

A huge plus of the event is that the event is for both hobby sportsmen and pros. As Caterina Clemens, overall coordinator of HSZ states: “It is a great thing that everybody can compete, whether you are a student, employee or citizen of Aachen”.

Suspenseful Finals of the NRW UniLauf-Cup

A few of the pros will surely be the participants of the NRW UniLauf-Cup. For them this event is about the deciding last points. After the first three stages of the competition in Cologne, Dortmund and Münster, the finals will take place in Aachen. The team of Aachen has a total of 38 points at the moment and is ranked second with Cologne. Therefore this event will be a suspenseful last run at the Lousberglauf powered by STAWAG.