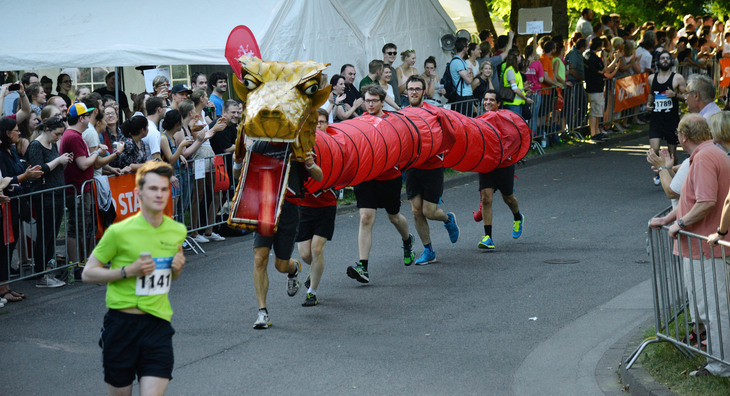 What began as a student initiative in 80s with 30 sports enthusiasts has long since become a large cult event. The Lousberglauf has been organized for over 25 years by the RWTH University Sports Center, the Sports Department, and the residents of the Rütscher Straße student dormitories – a concept that has proven the test of time. Around 200 vounteers make it possible to hold this event professionally and smoothly.

Aachen and the devil share a long history. The citizen of Aachen have always felt superior to the devil and have even been able to trick him a few times. Thus, the origin of the Lousberg can also be traced back to one of these stories. Livid that the citizens of Aachen had tricked him during the construction of the cathedral, the devil forged a new plan. He dug up sand from the North Sea underwhich he wished to bury Aachen. At today's Soers, however, he took a rest, in order to recover from the strain of carrying the immense weight of the bags of sand.

There, he encountered an old lady who had just come from the Aachen market. Exhausted, he asked herhow far it was to Aachen. However, the old lady recognized the devil and told him that her shoes, which she had supposedly just bought there, were already worn out. Disheartened, the devil threw the bags aside and abandoned his plan of burying the city of Aachen under the sand. The sand piled up and became the Lousberg and Salvatorberg. The citizens of Aachen had again managed to outwit the devil.

The beast, which resembles a large calf with sharp teeth and scaly fur is said to live in the sewer near the Bücher thermal baths and scare drunken men at night. Additionally, it is said to have demanded that the drunk men carry it on their shoulders, making it harder for them to get home. If the men begged or prayed, then the Bahkauv would become heavier. If they swore or grumbled, it became lighter. Women and children were spared from the Bahkauv. It is said, that Pippin the Younger, Charlemagne's father, fought the Bahkauv and defeated it one morning, stabbing and killing it in front of a steaming spring.