You Are Here: RWTH Eight Take Third at the Season Opener in Split

RWTH Eight Take Third at the Season Opener in Split 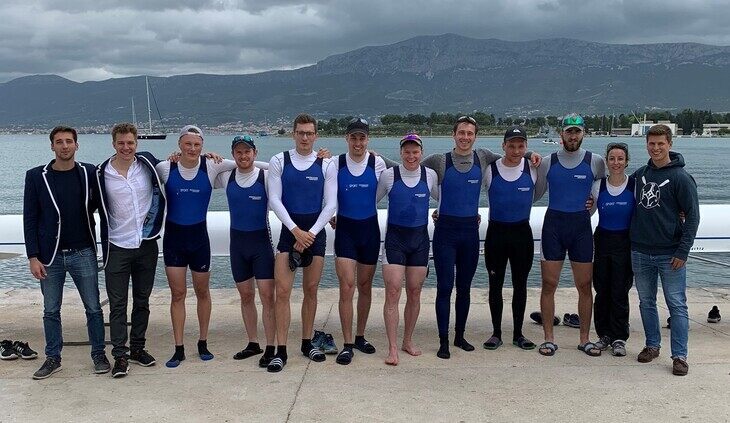 In Split, Croatia, the opening rowing tournament took place on the Sveti Duje regatta field, where the RWTH eight were able to take third place.

On May 5, the RWTH rowers went up against Europe’s best university eights in Split. They were also up against the blue boats from Oxford and Cambridge, who only three weeks earlier had competed in the famous Boat Race, which takes place yearly on the river Thames in London. The name stemming from the colours of the paddles of the rowers, with Oxford using dark blues and Cambridge light blues”. It is for this reason that the Oxbridge boats are collectively known as the Blue Boats. Eights from Krakau, Zagreb, Split and Dubrovnik also competed.

In qualifying, the Aachen rowing team performed excellently against boats from Oxford and Zagreb. Thanks to their win on the 1000m long stretch, Aachen’s team qualified for the final.

Despite having the worst lane in a field of favorites Aachen again took an early lead. Unfortunately, Aachen’s eight were unable to maintain their lead – as they had previously – and lost it to the two blue boats from Oxford and Cambridge. Eventually, Aachen crossed the finish line in third place, having left the rest of the field far behind and successfully defending the position they had achieved last year. Overall, the RWTH Eight were able to celebrate another successful start to the season and are looking forward to this year’s university championship in Hamburg at the end of June.

“In the last few years, we have always had active members of the FH in our team. Unfortunately, we have been missing capable rowers from the FH this year” said Michel, rower in the RWTH Eight. He would be delighted to welcome FH rowers into the team.