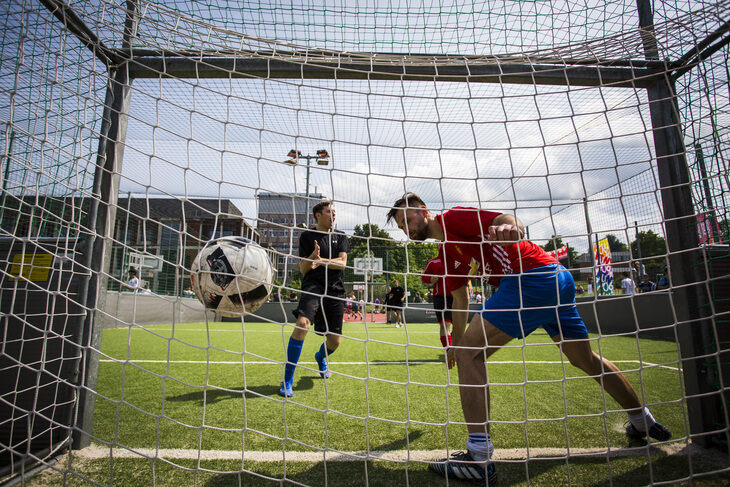 The RWTH FH Sports Day 2019 powered by Sparkasse Aachen took place on June 4 2019. With again around 3000 Participants, it was another successful celebration of university sports in Aachen. In glorious sunshine, guests were presented with a colorful combination of tournaments, taster offers and competitions on the sports grounds around the Königshügel. Additionally, those interested had the opportunity to try out the broad sports program of the University Sports Center (HSZ) for themselves.

Be it Softball, crate-climbing or sliding down a snowy ski slope in the height of summer: with over 50 sports represented on the Königshügel, there was plenty for students and other sports fans to discover. At the RWTH FH Sports Day everybody was invited to try out new sports.

The flagship of the Sports Day was again the Institute Olympiad. Teams consisting of the students, professors and employees of the various institutes and institutions of Aachen’s universities competed against each other in fun competitions. At this event, fun and sportsmanship were paramount. The teams tested their mettle in six skill and endurance games. The event was not only attended by teams from RWTH. Several teams from FH Aachen also took part. Noting the constellations of the teams, Peter Lynen, Head of the HSZ, highlighted a unique specialty of the event: “The RWTH FH Sports Day has a special aura of character. The Institute Olympiad enables teambuilding and promotes identification.” At the end of the day, the team “Morning Stars” came out on top. It received its medals and the coveted trophy from Prorector of RWTH Aachen University, Prof. Dr. Doris Klee, and Prorector of FH Aachen, Prof. Dr.-Ing. Michael Wulf.

However, not only at the Institute Olympiad did teams get the opportunity to prove themselves. In eight tournaments, which ranged from Cagesoccer over Tennis to Beach Volleyball, over 1300 participants gave their all to find out who could finally climb the podium and claim the prizes, generously sponsored by the event partner and sponsor Sparkasse Aachen. Dr. Christian Burmester, Chairman of Sparkasse Aachen, explained, that its longterm cooperation with the universities proved its commitment to the university and the importance of the common good over financial considerations. Explaining the reasoning behind the bank’s strong commitment and support for the event, he states, that Sparkasse Aachen wanted to give something back to the students and population of the region.

Due to the vast choice of sports offers, it comes as no surprise, that Ramon Marställer, Event Coordinator at the University Sports Center, had trouble picking out a favorite from amongst the taster offers. The taster offers ranged from crate climbing to new offers, like a surf simulator. The RWTH GYM presented its newest tool – the Wattbike – at its stand. Here, performance tests could be performed. Additionally, representatives of the Radentscheid Aachen were making the rounds at the RWTH FH Sports Day, gathering signatures for improved cycle infrastructure in Aachen.

The RWTH FH Sports Day is reliant on volunteers to enable its smooth running. “The volunteers were active from as early as 8 o’clock in the morning – setting up pavilions, stands and sport stations”, explained Juliana Kirchhoff, who for many years has been active as student representative for sports. Additionally, she highlighted the fun in taking part and the opportunity to expand one’s network.

The Chillout Lounge and After-Party

The RWTH FH Sports Day was concluded with the Chillout Lounge, which after the prize-giving ceremony provided the participants and over 250 volunteers a relaxed way to end an exciting day.

Those who were still in a mood to party after that, could, with a cold drink or two, dedicate a toast to the conclusion of the successful event at the Aftershow-Party at the Apollo – organized by the RWTH Aachen Student Union.