You Are Here: 30th Anniversary of the Lousberglauf powered by STAWAG – a Cheerful Celebration of the Running Sport 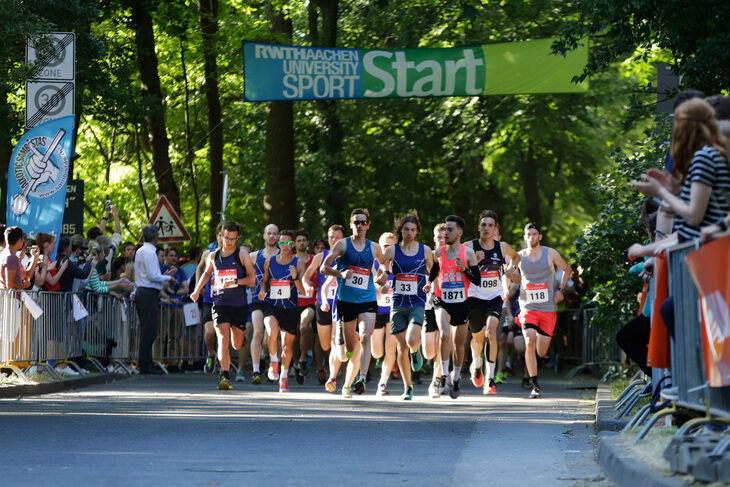 Again, the 30th Lousberglauf truly lived up to its reputation as a cult event of the University Sports Center. On July 3, it represented another success of popular sports in Aachen. The unique atmosphere, colorful cast of runners and jubilant crowd came together to ensure that even in its 30th iteration the Lousberglauf would again outdo itself! The Final of the NRW UniLauf-Cup was also exciting until the end.

The Lousberglauf is celebrating its 30th Anniversary this year. In 1989, the student initative of the Rütscherstraße halls of residence for the first time approached the University Sports Center (HSZ). Since then, the HSZ has been organizing the Lousberglauf, which has since established itself as a cult event, in cooperation with the Rütscherstraße Towers. Whether hobby runners or performance athletes – when the University Sports Center calls out the Lousberglauf countless runners heed the call.

From its humble beginnings with just 50 participants, the Lousberglauf has come far, now regularly reaching its maximum number of 2000 participants. The excitement of the runners and spectators was again consistently high. Professor Malte Brettel, Prorector for Industry and Business Relations of RWTH Aachen University highlighted the health aspect, explaining that health is an important factor in students’ lives and that the university opens its doors to the city with events like this.

Adding to that, Professor Dr. Rosenkranz, Prorector for Study and Teaching, explained that Sport is an important vehicle and that the Lousberglauf with its cult character is something that FH Aachen is happy to support.

Peter Lynen, Head of the University Sports Center, is delighted by the broad interest for the event and the fact that sport has once again become a means of identification between the two universities. The people of Aachen are also actively taking part in this celebration of the running sport.

For 15 years now, STAWAG has been supporting the event as the title sponsor. However, STAWAG was not only present on the sidelines, but also in the runners’ field. It again entered its own team, comprising employees and Aachen customers. Kirsten Haake, from STAWAG’s Corporate Communication, said, that STAWAG is supporting the attractiveness of the city with its sponsoring as a way of giving something back to the region.

Another valuable partner of the Lousberglauf are the Student Services of RWTH Aachen. The Student Services supported the event with their infrastructure, making available the grounds of the halls of residence. Additionally, they supplied the runners with food and drink after the run.

Due to its popularity, the Lousberglauf is not only a symbol for university sports, but also for the city and Euregio as a whole. Since 1989, the University Sports Center has been organizing the event together with the residents of the Rütscherstraße towers. Matthias Wilhelm, Chief Coordinator of the Rütscherstraße halls of residence, noted, that they are reliant on 130 volunteers every year and although it may seem difficult to find so many volunteers, they are always able to bring together a highly motivated team of volunteers.

Traditionally, the Lousberglauf is the final stage of the NRW Unilaufcup. Before the last stage on the Lousberg, Cologne was in the lead with 56 points, with Aachen following closely behind with 54 points. In the end, Aachen was unable to use its home advantage to close the gap. Aachen emerged from the NRW-UniLauf-Cup a proud second.