You Are Here: 114. Adh General Assembly in Hamburg 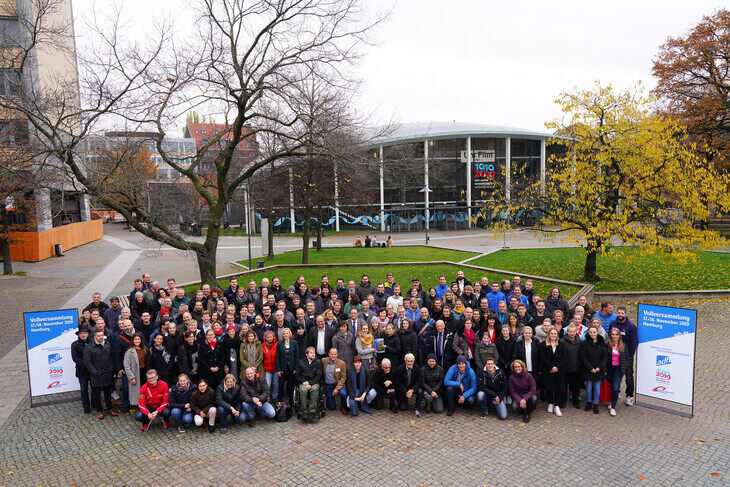 At the 114. General Assembly on November 18 and 19, 2019, the Adh members officially launched their bid to host the Summer-Universiade 2025 in the Rhine-Ruhr region. Michèle Pergande received the prize of honor and the subject of sustainability was enshrined in the statute and mission statement of the association.

Green Light for the Bid for the Summer-Universiade 2025


During the parliamentary part of the 114. General Assembly of the German University Sports Association, the members of the adh gave the official go-ahead for a bid to host the Summer-Universiade 2025 in the Rhine-Ruhr region. 95.4 percent of present voting members came out in support of the bid to host the second largest international multi-sport event. With the positive result in Hamburg, the representatives of the universities added a further milestone towards an official bid submission at the International University Sports Federation FISU.

Jörg Foster, chairman of the adh, noted that with this vote the association had shown that it has recognized the perspectives and opportunities for university sports in Germany which result from a bid to host the Summer-Universiade. The result represents a strong sign of confidence in the board and office, who systematically advanced the process and worked during the last few months to keep the members informed and engaged through a transparent process. For this reason, we can all celebrate the result, which gives momentum to the next steps in the process.

The Head of University Sports Hamburg, who with his team was responsible for direction of the general assembly and its accompanying committee session on the grounds of the University of Hamburg, also drew attention to the discussion contributions of the representatives of the 200 member universities of the association.

He explained that the adh is an association which always engages critically and constructively with subjects in the realm of higher education policy. Feedback from colleagues is particularly valuable for this. The future process is to be creatively shaped together and ideas from students and staff are to be eagerly welcomed. At the general assembly it became very clear that German university sports is committed to a sustainable Universiade concept, that will set a new standard for large sporting events and provide added value to university sports across the country.

In the coming weeks and months, the focus will be placed mainly on coordination with the communal authorities of the Rhine-Ruhr region, the federal state of North-Rhine Westphalia and the federal government with regard to financing.

Honor Prize of the Board for Michèle Pergande

With his welcoming speech, Jörg Förster, Chairman of the Board, emphasized that a critical and mindful approach is both necessary and respected in other areas of the university environment as well. The eight-person board reinforced this at the start of the two-day general assembly with a special award.

Michèle Pergande, sport representative of the University of Halle-Wittenberg, was awarded the Honor Prize of the Board and honored for her strong commitment against right-wing radicalism. After repeated instances of discrimination and expressions of right-wing extremism, Pergande ended cooperation with a number of martial arts clubs, which the university had previously cooperated with to run their course program. Together with friends she opened an own gym in order to take the problem into her own hands and solve it proactively. In August of this year, the studio “Redore” opened. It now offers 14 courses for over 80 members in the center of Halle.

In a moving laudation, the student board member David Storek praised Pergand’s work. Storke said that the gym was the result of conviction and love for sport and humanity. Where the values of sport were being spurned, Michèle not only took a firm stand, she was also brave enough to devise an opposing project, where skin color, race and gender do not matter.

The Head of University Sports at the University of Wittenberg-Halle, Detlef Braunroth, highlighted the close cooperation with Michèle Pergande and thanked her for her commitment.

In her own acceptance speech, Pergande expressed her delight, that the issue of resistance to far-right had been taken up. She was grateful for the appreciation shown and also thanked her friends, with whom she had founded the gym. Michèle said that she would honor the prize.

Besides Pergande, Dr. Axel Bauer of the University of Göttingen was made honorary member of the adh for his decades-long successful work for German university sports and the German University Sports Association.

Sustainability Enshrined in the Adh-Statute and Mission Statement

Just a day later, Bauer had another cause for joy: The subject of sustainability, which had long been a matter close to the heart of the long-standing head of Göttingen University Sports, was in the course of the second day of the session not only enshrined in the mission statement, but also integrated into the statute of the association.

The adh has thereby committed itself to align its actions with the principles of economic, ecological and social sustainability as enshrined in the United Nations Sustainable Development Goals.

With this step, which received equal support from the student and professional sides of the association, the adh not only expressed its desire to be a role model for others in the area of sustainable association work in future, but also closed the circle to the opening address of Dr. Martin Hecht. The chancellor of the University of Hamburg had in his welcoming of the delegates highlighted the importance of sustainable university sports.

Only physically active smart minds could shape the future. Movement-oriented health promotion increases motivation and working capacity of staff and contributes to a good work-life balance. Movement offers like the Pausenexpress have become a matter of course, which are gladly participated in by staff. Thanks to a varied program, university sports have become an integral part of university life.