You Are Here: Euphoria, Excitement and Lasting Cheer at the 32. Ice Hockey Uni-Cup for the ThyssenKrupp-Trophy

Euphoria, Excitement and Lasting Cheer at the 32. Ice Hockey Uni-Cup for the ThyssenKrupp-Trophy 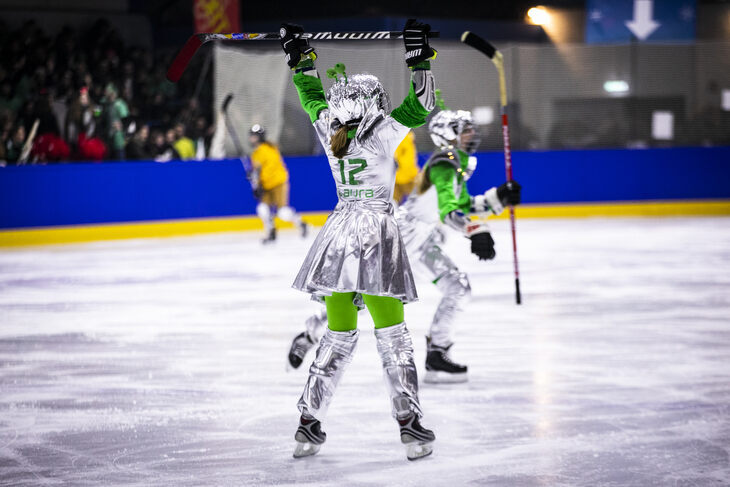 The rector is delighted by the creativity and commitment of the RWTH students.

For over 30 years the Ice Hockey Uni-Cup (EUC) has traditionally stood for sporting prowess and, above all, fun. On December 5 it was back and the Uni-Cup was again hosted by the RWTH Aachen University Sports Center (HSZ) in cooperation with the faculties. Together, all involved again guaranteed the unique atmosphere for which the EUC is known! In the sold out 100,5 Arena the fans supported their teams with cheers and imaginative costumes.

The Lion King, childhood heroes, and the universe were this year’s themes of the faculties of electrical engineering, medicine and mechanical engineering, respectively. In lion costumes, medical scrubs and fan colors the students supported their teams, creating a unique atmosphere during the games. Professor Dr. Ulrich Rüdiger, Rector of RWTH Aachen University was thrilled by the event: “No student can afford not to be here tonight.” Professor Rüdiger was himself present as a student at the very first Ice Hockey Uni-Cup. 32 years later the event is still growing ever more popular amongst students. Peter Lynen, Head of the HSZ, was equally thrilled. The Ice Hockey Uni-Cup is a special event of the winter semester and makes the university location of Aachen more attractive.

The event was opened with an ice hockey match between the ice hockey team of the University of Vienna and the Aachen Ice Emperors, the ice hockey team of RWTH and FH. The match was characterized by sporting excellence. In the first third a player of the Aachen Ice Emperors charged forward by himself, danced his way around the defenders and skillfully placed the puck in the back of the net. Carl Hemprich, representative for ice hockey at RWTH, was rather pleased by the result of 8:5. For the Aachen Ice Emperors it is a highlight to be able to play before 3000 spectators, as it is not every day that one gets to play in front of such a large crowd. Special about the EUC are the unique atmosphere and team spirit of the teams. “Aachen is a role model for university ice hockey in Germany” explained Carl Hemprich.

Themes of the Faculties

A further highlight were, as every year, the creative themes dreamt up by the faculties. The cheerleaders and players dressed up in elaborate costumes and built props. The mechanical engineering faculty picked as their motto the universe, while the medical faculty dressed up as their childhood heroes and the electrical engineers, inspired by their Lion King theme, showed up in lion costumes. “During the preparations for the EUC a strong sense of camaraderie and togetherness develops within the faculty. I definitely want to be a part of it again next year!” said Justin Schui, cheerleading trainer of the electrical engineering faculty.

Beside fun, joy and celebrating and cheering together, the ice hockey remains at the heart of the event. After all, all three teams are fighting to take home the ThyssenKrupp-Trophy for the faculty.

The Ice Hockey Uni-Cup is supported by the companies ThyssenKrupp and Deloitte. The University Sports Center can look back happily on a long-lasting partnership with ThyssenKrupp. For many years the sponsor has stood behind the EUC. Stefan Cassel of ThyssenKrupp said that he is happy to be there every year anew. Both firms highlight the importance of university sports, as it is essential to the everyday lives of students. Daniel Urban of Deloitte noted that sport is particularly helpful for the acquisition of soft skills like team working ability, competitive spirit and fairness, which are important on the job market.

As ever, the good cause was never far from the top of peoples’ minds at this year’s Uni-Cup. It is a long-standing tradition that the charity Right-to-Play receives around 1500 euros. This sum enables children in less privileged countries to run and play in peace. A new recipient organization this year is the charity Breakfast4Kids, which has set as its aim the provision of daily healthy packed breakfasts to as many disadvantaged children as possible in the Aachen and Cologne areas. The great importance of fun and joy of life at the Ice Hockey Uni-Cup are thus also reflected by the supported charities.

The FuFah-honour prize powered by Deloitte was won by the cheerleading team of the mechanical engineers.