You Are Here: NRW Unilauf-Cup – Charity and Winners 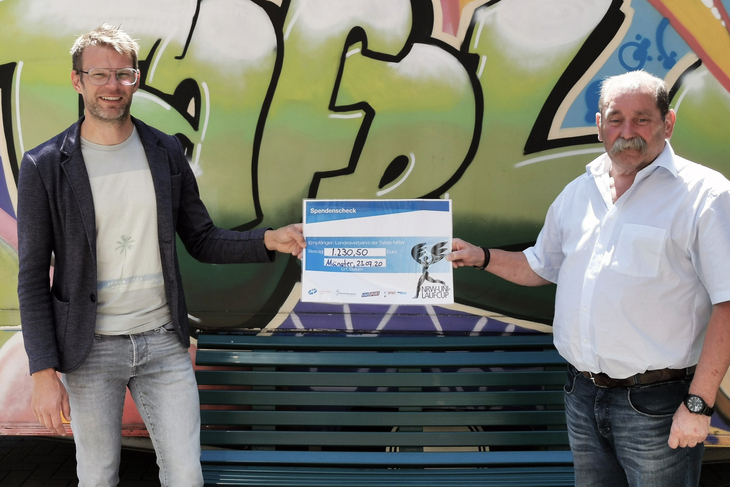 
The NRW Unilauf-Cup took place last Month. The Lousberglauf Digital powered by STAWAG was one of the runs of a four part running series.

The NRW Unilauf-Cup is a four-part running event. The Lousberglauf traditionally forms the last run of the series. This year, the event and its runs took place in digital form for the first time. The participants ran the route solo and transmitted their results, which they had tracked themselves, to the organizers.

This year, the NRW Unilauf-Cup was also dedicated to a good cause. Participation was free, but runners were encouraged to leave a donation for Tafel NRW e.V., 1230.50 Euros were raised this way. The sum was handed to the Chairman of Tafel NRW, Wolfgang Weilerswist, on July 23, 2020, by Jan Philipp Müller, Chairman of the State Conference for University Sports in NRW (LK NRW).

The five fastest men and women of the overall standings were each awarded prizes. These were provided by the various sponsors of the university sports locations. From Aachen, STAWAG, the title sponsor of the Lousberglauf, contributed, for instance, with a running dress for the winners. The women’s overall standings was topped by Vera Coutellier from Cologne who covered the overall distance of 35.555km in an total time of 02:13:21. Hendrik Pfeiffer topped the men’s with an impressive time of 01:52:00 over the same distance. The team competition was again won by team of Cologne University, who last year only just edged ahead of Aachen’s team. This year Aachen’s team only managed sixth place. The complete results can viewed on the site of the Lousberglaufs.

Overall, 239 Runners took part in all four runs of the NRW Unilauf-Cup. However, the individual runs each had many more participants. The Lousberglauf was able to attract the most running fans. 550 runners covered the 5’555-meter distance in the week of June 29 to July 5. The runners could pick the route freely, although 14% did decide to take on the challenge of the Lousberg proper. The demanding gradient of the run makes it a particular challenge.

We hope to see the participants take on the challenge together and in person again next year– at the Lousberglauf 2021!