16 universities from 7 countries will be developing a pilot scheme together called "Active Campus Europe" for non-sport-enthusiasts from 2017 until the end of 2018 and receive financial support coming from the Erasmus + - program. 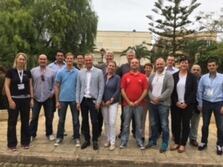 From 2009 to 2011, the University Sports Center of RWTH Aachen organized a project for health promotion together with three other German Universities. A concept for the movement offer at work called "Pausenexpress", which also gained a lot of appreciation even beyond the barriers of the university, was developed together. The two-year project was supported in the context of the "Inform"-program of the Federal Ministry of Health and the Federal Ministry of Food, Agriculture and Consumer Protection.

Based on this program knowledge, other innovative offers of health promotion should be developed, tested and spread. The representatives of the University Sports Centers of the University of Applied Science Turku and Tampere (Finland), Middlesex University and Imperial College London (United Kingdom), Technical University Eindhoven and University Maastricht (the Netherlands), University College Dublin and Trinity College Dublin (Ireland), University Vigo and Barcelona (Spain), Minho University Portugal and North-Rhine Westphalian Universities RWTH Aachen, University Bochum, Bonn, Münster and Wuppertal met informally at the ENAS-conference in Malta. ENAS (European Network of Academic Sports Services) is integrated in spreading the results of the project as a partner. The two-year project plan was coordinated and determined on this meeting. In the next two years, "Best practice models" will be collected and analysed with regard to national utilization, intervention programs will be tested and evaluated on different levels.

The next project meeting will take place in January 2017 in Maastricht. "Each project member is highly motivated to develop the content of the project and to achieve a contribution to the health promotion for non-sports-enthusiasts", states Peter Lynen, head of the University Sports Center of RWTH Aachen and head of the project of "Active Campus Europe".