You Are Here: Glamour, dance and show at RWTH Gala Ball 2016 presented by Sparkasse Aachen

Last Saturday, November 26, around 900 guests danced the night away at the RWTH Gala Ball in the sold out Eurogress. Aside from the dancing, spectacular shows filled the guests with enthusiasm. The social highlight of the winter semester was organized by the University Sports Center of RWTH Aachen (HSZ) on behalf of the vice-president's office. 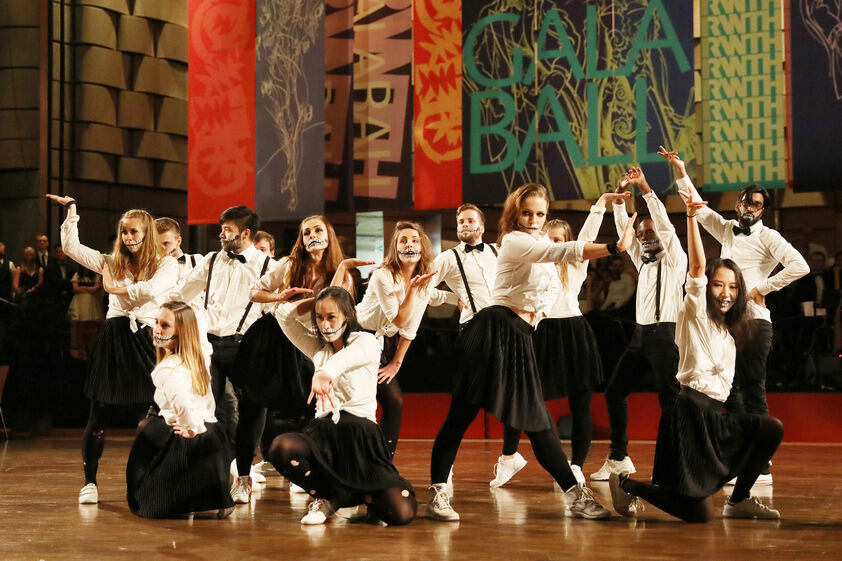 The Gala Ball has been the glamorous highlight in the academic calendar of the RWTH since 1995. For the first time, the dance floor war opened by Prof. Rudolf Mathar, pro-rector of RWTH Aachen for research and structure. He handed over his right for the opening dance, so that a female dancing couple whirled around on the dance floor. "The Gala Ball is one of the events, which makes sure to keep the University together", states Prof. Mathar and stresses out the social aspect specifically: "Now that we are coming together in another environment, exchange ourselves and dance, makes this Gala Ball a very special event." Such a social event beyond borders marks the University Sport of RWTH Aachen. "Sport serves for an emotional experience connected to the University", declares Uli Weber, research assistant of the HSZ.

Thanks to the extensive offers of courses regarding ballroom dancing, which is special in the present grounds of University Sports, the dance floor of the Eurogress is always very well filled. Chairwoman for ballroom dacning Susanne Wiese takes care of this fact. You don't have to be a pro: "Everyone is invited to dance, a sufficient knowledge of the basic steps is enough", she states. Beside the dancing of the guests, the program consists of three traditional performances of different groups of the University. "The different performances underline the diversity of dance sports", states Melih Özkardes, coordinator of events at HSZ. The guests had the possibility to admire the Uniformation, two dancing couples and the Campus Dance Crew as Hip-Hop group. "It is the mixture of show performances and dancing themselves which lets the Gala Ball stand out", states Uli Weber.

There was also a little surprise for the dancing enthusiasts at the end of the evening: the current popular "Mannequin-Challenge" was held. The guest had to keep their dancing posture for a few minutes and had been filmed in the meantime. The insight of the Gala Ball can be found on the RWTH Facebook page in the next few days. "I'm impressed", states Prof. Mathar and is already excited for the next Gala Ball.