You Are Here: Aachen Steelers win the 29th Ice Hockey Uni-Cup for the ThyssenKrupp trophy 2016.

This iconic event of the University Sports Center (HSZ) of the RWTH Aachen is and will remain that sporty highlight of the year with the best atmosphere. When about 3.000 ice hockey fans with scarves, flags, drums and unusual costumes run into the 100,5 arena, it´s obvious to everybody: The night is going to be wild! 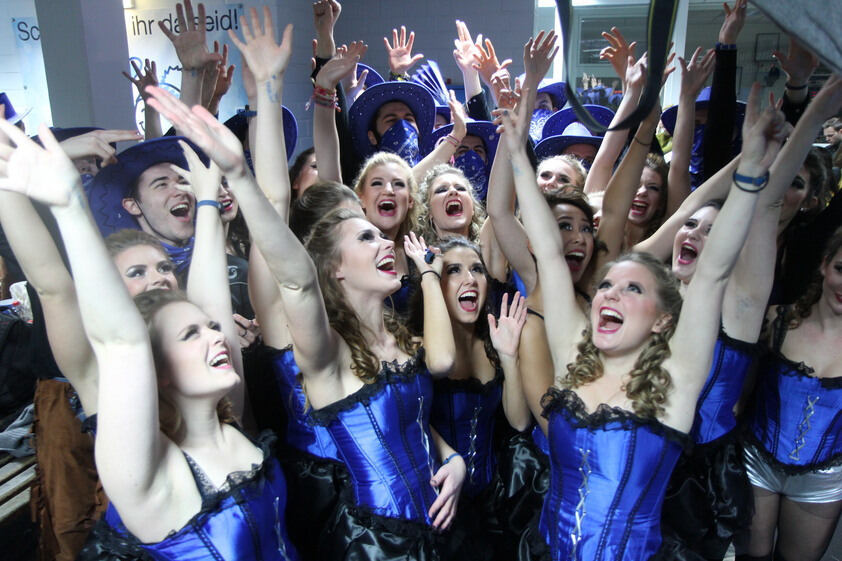 The focus is on the fun character and “is important as compensation to the high learning workload” states Professor Dr. Ernst Schmachtenberg, Rector of the RWTH Aachen. According to him this event is “that sports event to be and an unique event during the semester”. The students usually don´t experience a similar “close university” as Peter Lynen, head of the HSZ, points out – only the Ice Hockey Uni-Cup (EUC) offers the opportunity undergoing the RWTH that emotionally.

As the tradition determines the EUC is opened by the Ice Hockey team of the RWTH which barely lost against the powerful opponents of the University of Vienna. “We got surprised in the beginning”, Thorsten Tillmann of the “Aachen Ice-Emperors” explains, even he is still satisfied with his team´s performance. His team provided assistance for the ice hockey teams of the student representative councils a few times in advance to guarantee a good preparation for the upcoming matches. “We do have an awesome team which plays well together”, states Samuel Stux from the student representative council for mechanical engineering and is glad about his team and their high motivation. That was rewarded because the Aachen Steelers won after a thrilling head-to-head race with a two-point advantage and could take home the coveted ThyssenKrupp trophy.

The trophy was sponsored by ThyssenKrupp Steel Europe AG, the heading sponsor of the EUC. Andreas Reitz took it for granted “to support the quality of teaching at the RWTH which we potentially can win for our concern”. The head of the HSZ is very happy about that because this kind of event of this quality couldn´t exist without that sponsoring. Also important is the voluntary support of the organizing team – “The world would be nothing without volunteer work”, Prof. Dr. Schmachtenberg boils down to an essence.

As every year creative costumes of the single teams belonged to the special atmosphere of the event. “We started to create our costumes in summer”, states Laura Witzenhausen from the student representative council for electrical engineering. “We want to make our fans proud”, she adds on and it succeeds: Her cheerleading group could convince the jury while presenting an acrobatic performance styled with cowboy outfits. Subsequently to the EUC that triumph was celebrated in the night club Starfish Aachen.

The Ice Hockey Uni-Cup doesn't just serve fun and entertainment, it also serves a good cause. For the tenth time a part of the raised proceeds from the event is donated to the organization “Right to Play” which gives kids the chance to play. “That´s so important” highlights Chantal Breen from the organization. Furthermore Wabe e.V. which helps homeless women gets supported in this year. The raised proceeds should answer the “small individual wishes” of all the persons concerned as Alois Poquett from Wabe quotes.