You Are Here: Official Opening of the Project “Active Campus Europe” by Professor Dr. Doris Klee 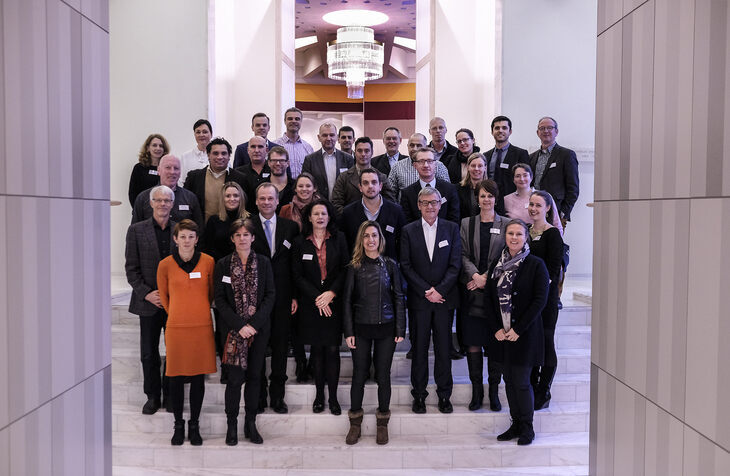 On January 24, 2017 the European health project, which is led by the HSZ of the RWTH, was festively opened.

Professor Dr. Doris Klee, prorector of the RWTH Aachen, welcomed the 25 Attendees of the project, which represent 16 universities in seven European countries, while the provincial governor and prorector professor Dr. Harm Hospers of the university Maastricht was also present. The start of this project was celebrated in the Provincial Gouvernement Building, which was also the place of the convention of the head of states, when they signed the Maastricht Treaty 25 years ago.

Professor Klee stressed the huge engagement of RWTH Aachen concerning the health management, which is also partly organized by the HSZ. She highlighted proudly the aspect, that this is the second time the HSZ brought a health program to Aachen.

From 2009 to 2011 the project “Gesundheitsförderung und Prävention für Studierende und Beschäftigte durch Sport und Bewegung”, which can be loosely translated as health promotion for students and employees with sports, was the first huge promotion of the “INFORM”-program that was enacted from the Federal Ministry of Food, Agriculture and Consumer Protection. Moreover, it was the first university project that was granted with this recognition. With the partner universities Potsdam, Paderborn and Wuppertal, a role model for inactive people was developed and “INFORM” named it one of the best workplace programs of the health promotion.

Basing on this project, RWTH Aachen developed a new creative concept and applied for grants with the Erasmus+ program and 15 other universities. By the end of October, the promotion for this program was announced by the EU. And again it was the first time a university sports center was supported with the maximal project funding. Professor Klee congratulated the head of the HSZ Peter Lynen for this great success, since he asserted himself in the race with 150 other competitors.

She wished best success to everyone working on the “Best Practice Model” manual for European universities and on movement programs for those who are not actively doing sports, and on top of that, she invited them to the closing ceremony in Aachen at the end of 2018.