You Are Here: The University Sports Show 2017 Entered the Next Round

The University Sports Show 2017 Entered the Next Round 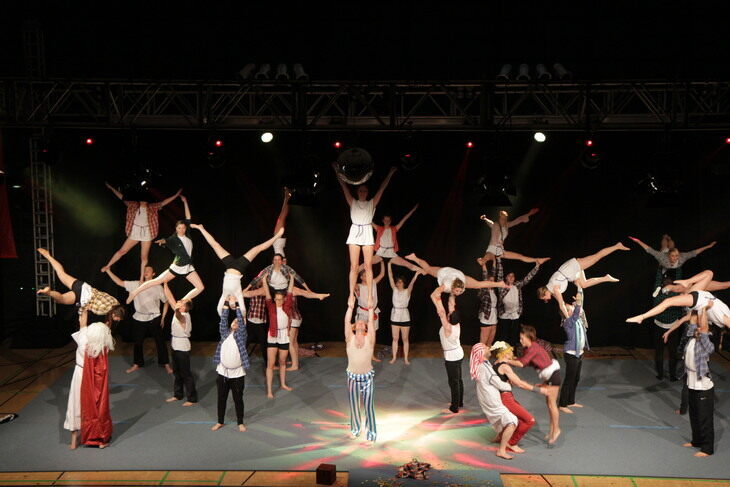 The University Sports Show is one of the highlights in winter term of RWTH. Every year the HSZ demonstrates its divers sport offers: The audience is amazed by many creative acts and also athletes showing outstanding performances in their disciplines.

For those who could get hold of the desired tickets for the University Sports Show, last Tuesday was a very entertaining evening. Again, tickets were sold out weeks before the event. The diverse acts of the HSZ, which were supported by the BigBand “Full House” of the FH Aachen, topped the audience’s high expectation. With the Judo caterpillar “Nimmersatt”, the acrobat performances of Asterix and Obelix, or many other diverse dance show acts, there was lots to see for the crowd.

“The professionalism is outstanding”, said Professor Dr. Josef Rosenkranz, who is prorector for studies and education at the FH Aachen. He thinks university sports are linking us to the university, besides the usual auditorium. Professor Dr. Ernst Schmachtenberg sees things exactly the same way. On top of that he believes that psychosocial health also benefits from sports.

Dr. Christian Burmester, head of the Sparkasse Aachen, could confirm these statements, since he has been a guest of this show for some years now. “No show is like the other”, he added happily, “And we would like to return something to the region”. That is why the Volunteer Prize by Sparkasse Aachen is given to those who show special engagement to university sports yearly.

This year the award went to Steffen Huppertz, who was main coordinator of the residential towers in Rütscherstraße for the 10th time in a row at the Lousberglauf. “Volunteering is a main aspect in university sports”, as Peter Lynen, head of the HSZ, pointed out. He was very thankful for the student’s helpfulness as well as the support of these partners, as otherwise it “would not be possible to show our appreciation”. Besides Sparkasse Aachen, there are also other partners of the show such as STAWAG, which supports die HSZ with the awarding of the “Top Class Sports Prize by STAWAG”. This award went to Lars Entgens, who was honored for outstanding performance in judo. “It is extremely impressive to have a place on the podium in national and international tournaments while you are a student at the same time. We would like to support it”, said Eva Wußing, media spokesperson of STAWAG. Top accomplishments are also performed by the organizing team of the event, as they put great effort in preparing this great sports show.

In 2016 there were 36 first, 71 second and 34 third places achieved so that more athletes than ever got honored. Peter Lynen gave thanks to the university administration, since it would not be possible to have such top positions without their support. Professor Schmachtenberg and Professor Rosenkranz are fascinated by the work of the HSZ and would like to campaign for the difficult sport facilities situation. “We will work on it”, the rector of RWTH Aachen University promises.