You Are Here: Successful Premier of the RWTH Campuslauf

Successful Premier of the RWTH Campuslauf 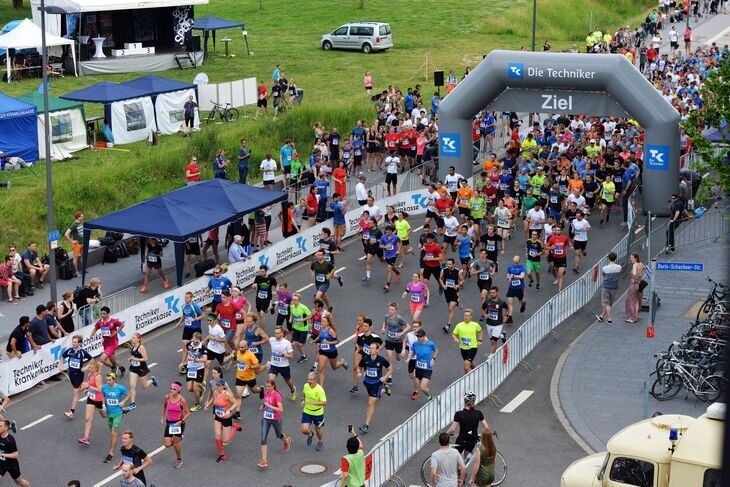 Perfect weather, an enjoyable running track as well as the diverse framework program were just a few reasons why about 900 runners were taking part in this event on Campus Melaten. The aim of reviving this Campus area was definitely accomplished.

About 50 student assistants and even more volunteers were doing their best to support the premier of the 1. RWTH Campuslauf, the second huge running event of the University Sports Center of the RWTH. You might ask yourself, why there is another running event besides the famous Lousberglauf. “We would like to include Campus Melaten more to our campus life”, personnel and scientific prorector of RWTH Aachen Prof. Dr. Doris Klee explains. And the most innovative and newest part of the university is definitely worth to be presented to the people.

“There is no other connecting element such as sports”, Peter Lynen, head of the University Sports Center states. That is why this event was the best choice for all members of the public. Moreover, such an event is presenting the cooperation and the exchange of the RWTH and FH perfectly. “University Sports connects both universities”, Prof. Dr.-Ing. Michael Wulf, prorector of FH Aachen says, who is impressed by the keen participation of FH students and all attendees in general.

Despite the unfavorable date at the Pentecost weekend and the upcoming excursion week, about 900 enthusiastic runners were taking part in the premier of this event and gave their best at the FunRun, FitnessRun and relays. Not even the hot temperatures or the storm warning, which was luckily proved false, could stop the motivated runners that were on the way on Campus Boulevard. Outstanding results were achieved by Daniel Kreutzer, who was winner of the FunRun with 16 minutes and 18 secounds, Martin Pelzer, who was first at the FitnessRun after 30 minutes and 56 secounds and by the “Chaostruppe”, who was first team on the relay race.

“I am thrilled by the action here”, tells mayor Norbert Plum, who is councilor of Kullen and was involved in the development of the area right from the start. This event is also due to the health partners Techniker Krankenkasse (TK) and Universitätsklinikum Aachen. The TK knew right away that they would like to support this event, as “that is how you reach people that are not so sports related”, as Almut Otte, who is consultant of workplace health promotion. That was achieved, as the event also offered massages, professional foot measurement, Pilates courses, catering by AKL and Pfannenzauber and on top of this all also musically support by DJ Grei Papa. Thus, even those who were not taking part in the races were entertained.

So maybe there will be a lot of spectators again at the event next year. The University Sports Center, both universities and the health partners are on the same page that this event has the potential to be a cult event. Therefore, a continuation is planned.