You Are Here: This Way to Lousberglauf 2017 Powered by STAWAG! 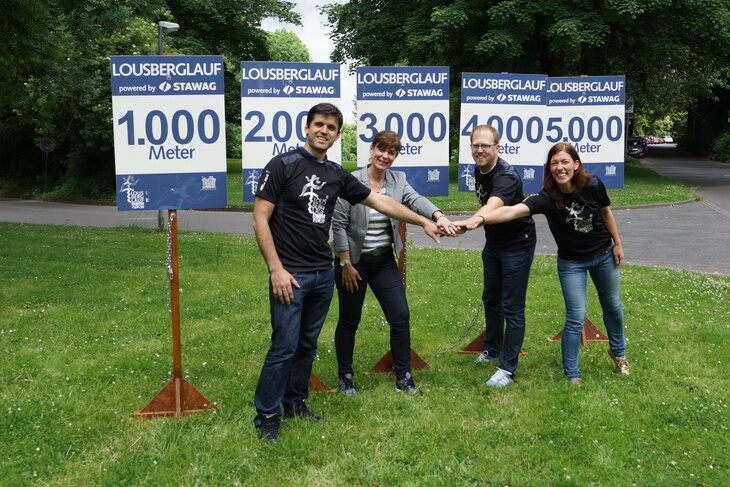 The signs have been placed, the countdown has started and there are even some remaining spots! It is not long before the Lousberg will become the location of the most famous running event of the year. On July 5, the Lousberglauf powered by STAWAG will kick off!

It started 30 years ago as a student initiative with inhabitants of the residential towers in Rütscher Straße and now it is a major event with cult status. Melih Özkardes, overall coordinator of the HSZ, ranks the Lousberglauf with its 2000 runners as the “biggest university event of the region”. Traditionally, the event is organized in cooperation with the inhabitants of the towers, the sponsor STAWAG, and the University Sports Center (HSZ).

Even though the 5555m running distance might not seem too long compared to other running events, the difficulty is about the special conditions of the Lousberg. As overall coordinator Caterina Clemens stresses, “the running track should not be underestimated”, since the Lousberglauf definitely has a huge height profile. The incline is steep as you do not call it the Devil’s mountain for nothing. That is why the early signposting of the race is helpful for an efficient preparation for the run. Due to the demanding track, most runners are hobby sportsmen or athletes. Kirsten Haacke, working for the sponsor STAWAG, likes the fact that everybody gets a chance to participate in this event. But for her the event is definitely about fun! And on top of this, the Lousberglauf was the reason that a company sports group at STAWAG developed which is also a great success.

A few of the pro athletes will surely be the participants of the NRW UniLaufCups since the finals of this competition will take place in Aachen again. Recently, Aachen’s runners were successful in the tournament in Dortmund. As there are double appointments, there are only three competitions this year that count for the overall ranking. So which University Team will win in 2017? It will be interesting to see!

In cooperation with Steffen Hupperzt, who is overall coordinator of the residential towers in Rütscher Straße, preparations for the Lousberglauf powered by STAWAG are in full swing. Finally, there would not be a Lousberglauf without the towers. A group of 150 hard-working supporters of different areas such as track marshals, set up of signs or bib number distribution will create an outstanding running event. This is a good reason for Huppertz to “provide his hill to the public and to let this event happen in his front garden”.

But pay attention: On June 28 at 10am there is one last chance to participate in this run! More information can be found in lousberglauf.de.