You Are Here: Tournament Report DHM 2017 in Karlsruhe 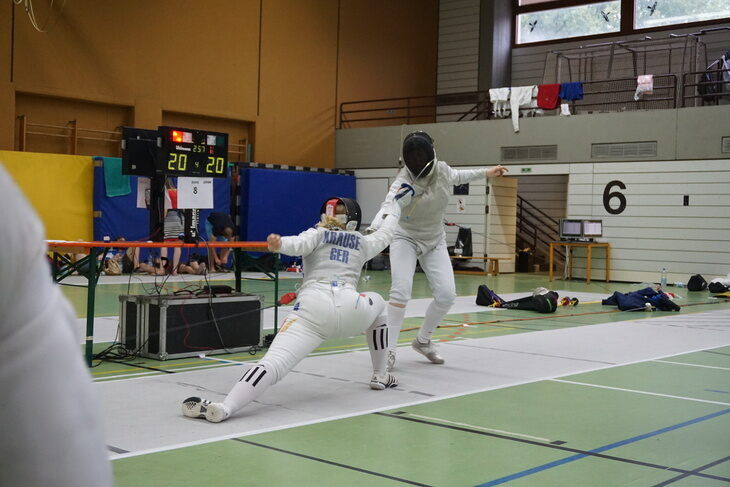 The university fencers of WG Aachen and its 19 students participated in the German University Championships in Karlsruhe and they had a few suspenseful matches!

On Saturday, June 3, the competition started at 9am at Herrendegen. 28 teams were starting, and there were also two teams from Aachen. Aachen 1 had a successful first round, whereas Aachen 2 was struggling a bit. In the following 32er K.O. round, Aachen 2 with its members Julian Watson, Nils Hamacher, Stefan Geffroy lost with a close 43:45 difference against WG Heidelberg. Aachen 1 with Petar Peric, Robert Styn, Dominik Foerges, Daniel Zschätzsch were winning their match and therefore they could demonstrate their best in the finals. The team of Aachen competed against WG Düsseldorf, and won with a clear 34:45 score. That is how WG Aachen won their first medal.

While all men were having their matches, the ladies foil fencing tournament started. And in this competition two teams of Aachen competed as well. The ladies were highly motivated in the preliminaries: Lena Lärm, Ilsa Scheuch and Charlotte Kraue were the defending champions and they had an excellent start of the tournament as they won all their matches with 45:11. Aachen 2 with its members Julia Mock, Nadine Fabian and Miriam Koller could better themselves after a bumby start. In the following 16er K.O both Teams could win their matches so that an Aachen duel occurred, which was won by Aachen 1. That’s why Aachen 2 won the 8th place. Aachen 1 had the chance to compete in the finals against WG Hamburg. The team could defend their title successfully as they won this match with a 45:40 score.

The last competition on that day was about the sabre fighting of the men. Aachen was represented by Daniel Zschäsch, Max Zurkaulen, Sam Liao and Stefan Geffory. After a successful preliminary with two wins and one defeat, the team of Aachen could start in the K.O round. In the semi finals Aachen was fighting against Mainz and unfortunately they won this match. That’s why it was a great bronze medal this team could achieve.

All in all the first day of the tournament was quite good for Aachen since there was one gold, one silver and one bronze medal.

It was 9am when the male foil matches started. There were three teams for Aachen starting, and all of them had a good preliminary so that they had a free ticket for the K.O. round. The following matches were all won clearly by Aachen’s teams. Unfortunately there was another duel of Aachen’s teams on Sunday which was won by Aachen 1. During this duel, Aachen 2 fought a suspenseful match against the winning team WG Heidelberg.

After that, Aachen 1 fought against WG Mainz and lost. That’s why this team had a successful third rank and Aachen 2 a great fifth rank. Place 6 was won by Moritz Kröplin, Julian Watson, Felix Garg and Gerwin Schüffl.

In women’s epee there was one team of Aachen which consisted of Lena Lärm, Julia Mock, Ilsa Scheuch and Maritess Vollrath. The ladies had a successful preliminary and won their K.O matches clearly. Unfortunatly they lost their quarter finals against WG Karlsruhe with 44:42.

The last tournament was the women’s sabre. Miriam Koller, Nadine Fabian and Henriette Süß were representing Aachen. They were dominating in the preliminaries, so they had the first place in the K.O matches. But still they won their matches and could fight in the finals. And even this match was clearly won by the team of Aachen against Mainz. Therefor this team could defeat their title as well.

That’s why the second day of the tournament was also very successful! There were one gold and one silver medal for Aachen. Altogether Aachen won 2x gold, 1x silver and 2x bronze in the six different competitions!