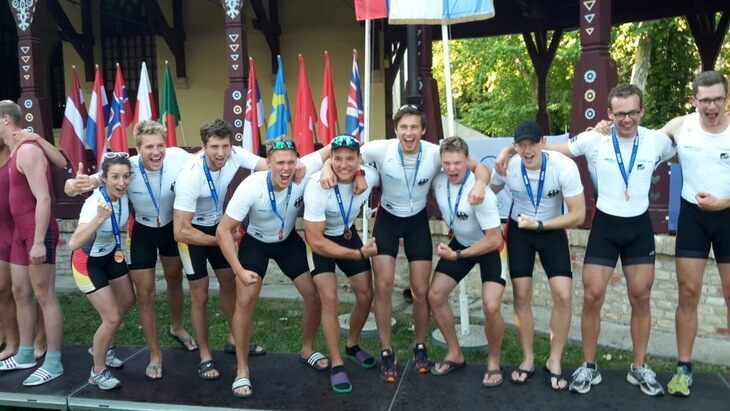 Elation after the competition in Subotica: The RWTH team secured third place and with it the best result in the history of the RWTH rowing eight!

The RWTH Men’s Eight were once again at the starting line, looking to prove themselves in a strong eleven-boat-field. Following second place in the qualifying heat against the strong British team from Oxford Brookes University the reigning German University Champions were able to secure their place in the final during a tactically well-navigated race in the repechages. The contest for the desired medals took place on Sunday amid strong crosswinds and whitecaps on Lake Palic.

The eight from the city of Charlemagne were, despite their placement on the worst outside lane, able to keep their nerve and were rewarded with a bronze medal behind Oxford Brookes, Great Britain and TU Delft of the Netherlands. “Our technique was the trump card against our physically tougher opponents, with the bad conditions playing into our hands.” Said Lovis Heinrich. “I still can’t believe it!” exclaimed Thilo Bialaschik, the stroke of the successful team, describing his emotions hours after the race.

The team will now concentrate on their exams for the time being before returning on the 22nd and 23rd of September to the German University Championships in Brandeburg in order to defend their title again and qualify for the next EUC in Portugal.