You Are Here: Fascinating and Multifarious University Sports Show 2018 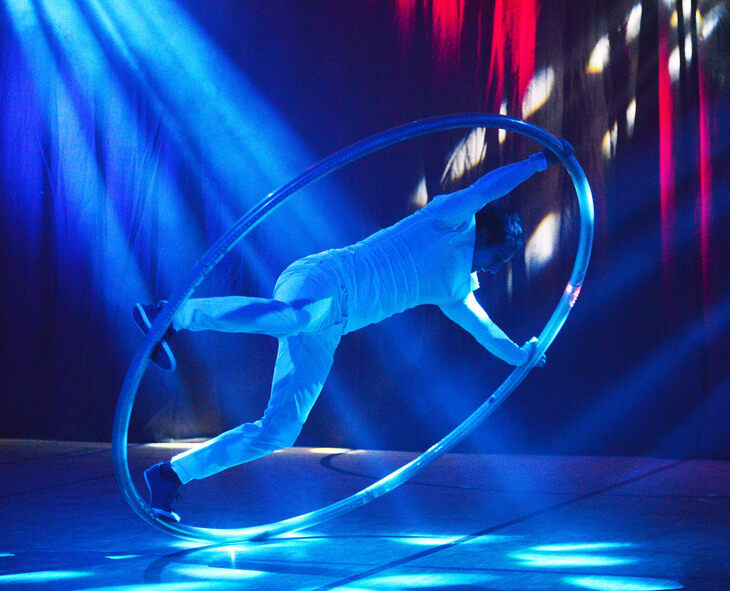 In contrast to the monochrome snow, the RWTH Aachen University Sports Center (HSZ) again presented a colorful and varied show program, with an exciting mix of sports. Next to the Ice-Hockey Uni-Cup, the University Sports Show is one of the highlights of the winter semester. The various university sports groups shone, showing off their acts with creativity and passion. Before the show, athletes were honored for outstanding performance in their respective sports.

Those lucky enough to secure tickets to the show this year were rewarded with another spectacular show. The audience was kept entertained by the FH Aachen Big Band “Full House”. The rector of FH Aachen, Professor Marcus Baumann also helped make the audience’s mood, taking the chance to accompany a song on the keyboard. Professor Doris Klee, prorector of RWTH Aachen University, was visibly excited by the show. She observed that it was remarkable how much effort students were able to put into the University Sports Show, despite their stress and the exam phase.

From the seven dwarves to Star Wars: There was something for everyone at the show. Professor Marcus Baumann considers the skills that are acquired in sports are also important during their studies. Because those who have learned how to bite through in sports, will manage it their studies, too. Additionally, the rector of FH Aachen added, university sports are a way to gain social ties at the university and beyond the lecture hall. A traditional component of the University Sports Show is the awarding of two honorary prizes by the university rectors in the Eckertweg sports hall before the big show. “Volunteering is one of the pillars of university sports”, stresses Peter Lynen, head of the university sports center. The “Ehrenamtspreis der Sparkasse Aachen” for volunteering was this year awarded to Stephanie Küppers, representative for spinning and Brigitte Dierke, who has been volunteering at university sports for over 10 years.
By awarding the “Spitzensportpreis des Aachener Hochschulsports powered by STAWAG” for outstanding sporting achievement was this year awarded to Alexander Lube, who achieved 5th place in the mixed synchronized diving universiade in Taipei.

Juliana Kirchhoff, RWTH Aachen student representative for sport, is impressed by the commitment of the students: “It is incredibly impressive, what students manage accomplish, particularly considering their stress with university. They sacrifice a lot of their spare time for practicing and rehearsals. For this we would like to give them our best support.”
In the competition year 2017, 31 first, 7 second and 38 third places were achieved and a total of 67 student athletes honored. “Without support from university leadership none of this would be possible” thanks Peter Lynen of University Sports. The RWTH and also Professor Marcus Baumann are passionate about the work the University Sports Center does and want to do everything they can to solve the difficult sports facilities situation. A new sports center of FH Aachen on its Jülich Campus will be the first step.