You Are Here: Yet Again a Successful Campuslauf!

Yet Again a Successful Campuslauf! 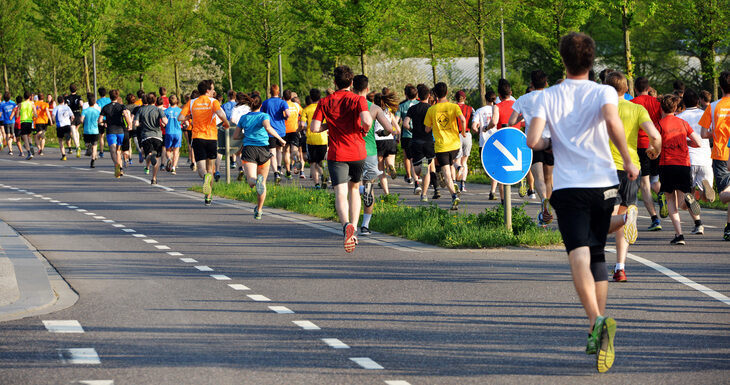 On your marks, get set, go! The RWTH Aachen University Sports Center (HSZ) was able to lure over 600 more runners than last year to the Campus Melaten last Friday, April 20. Again, the Campuslauf was a complete success and was well received by runners and spectators alike.

The first event of the summer semester, over 1‘500 excited runners took part in the RWTH Campuslauf and gave it their all in the FunRun, FitnessRun and relay. Despite the unseasonably warm weather, the runners were motivated until the end, so that a colourful crowd was present on the Campus Boulevard. Particularly successful were Martin Heuschen, winner of the FunRun with a time of 14 minutes and 17 seconds, Martin Heusdien, the first to reach the finish in the FitnessRun in 30 minutes and 27 seconds and the “Lauftreff Hochschulsport Montag”, who emerged victorious in the relay.

With over 105 helpers, many of which volunteers, the first RWTH Campuslauf was topped. Last year’s race was also surpassed in regards to the number of runners. “The aim of the Campuslauf is to integrate the campus into the lives of the students.” explains Prof. Dr. Klee, vice-rector for human resources management and development of RWTH Aachen University. “The Campus should be better recognized, thereby developing a connection between citizens and campus” adds Marcel Philipp, Lord Mayor of Aachen.

As well as promoting sporting ambition, the Campuslauf acts also as a bridge for foreign students to get comfortable in the town and gain social ties more quickly. “Sport brings people closer together” asserts Peter Lynen, Head of the University Sports Center, citing as an example “Kontakthüpfen”, which brings back warm memories among alumni and also excited Lord Mayor Marcel Philip as a student. The Campuslauf also stands for cooperation between the city and the FH. “University Sports brings the two universities closer together and serves to facilitate contacts and exchanges between the two bodies of students. Sport is a good opportunity for this.” adds Prof. Dr. Michael Wulf, Vice-Rector of the FH Aachen, who was excited by the active participation in and positive reception of the event among FH Aachen students.

“I think it’s great that were bringing some life to the Campus Melaten, since it, after all, represents the city’s most dynamic and outstanding project”, rejoices Lord Mayor Marcel Philipp, who has been involved in the development of the campus since the very beginning and happy about its sporting use. The HSZ is also very grateful for its health partner, the Techniker Krankenkasse, without whom the event would never have been possible. The TK, which is based on the Campus Melaten didn’t hesitate to support the event a second time. “This way, you can also reach people who aren’t particularly active” explains Masoud Mirzai, Head of Customer Service at the Aachen-Campus. Thanks to the support of partners with massage offers, snacks from the Moss Bakery and musical accompaniment by DJ Julian Knörich the event also had something to offer non-runners and thereby managed to lure many to the Campus Melaten.

New to the Campuslauf this year were an Instagram competition, with a year’s E-bike hire as the main prize, and the kids program “Bring your Kids”, which was organized in cooperation with the Kindergarten Vincerola and the day care centers of Aachen’s Student Union. “We wanted to join in the spirit of the event and the kids were blown away and were motivated to run around the kindergarten three times more than needed” rejoices Gabriele Schneider, Head of Department in charge of the Daycare Centers of the Student Union. The kids were, in contrast to the various runs of the Campuslauf, offered a shorter course to run. Like everybody else, they were given starting numbers and awarded certificates at the end of the race. “Sport plays an important role in developing the cognitive and motor skills of children and fun in sport needs to be supported from a young age” adds Emanuel Imfeld, Educational Head at the Kindergarten Vincerola.

The University Sports Center, the universities and health partners agree, that the 2. RWTH Campuslauf has definitely filled the potential for a cult event this year! Ramon Marställer, Event Coordinator of the HSZ, responsible for the coordination of volunteers, is convinced that an event of this kind would never have been possible without the assistance of volunteers. The sequel to the event is definitely already planned in the University Sports Center’s calendar next year.