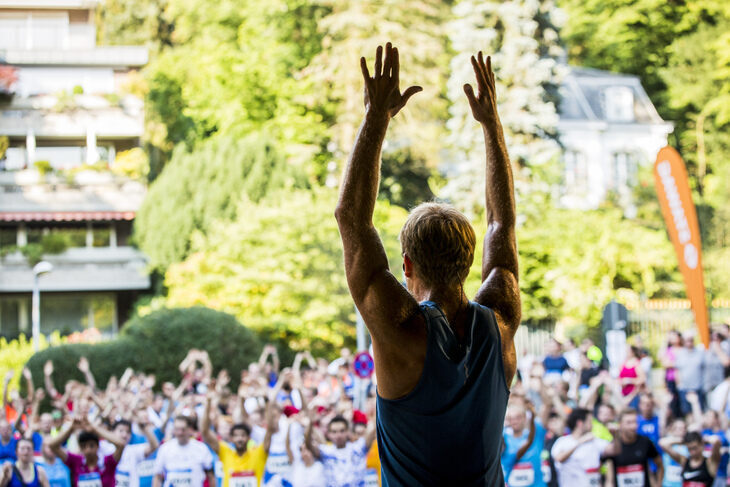 On July 4, the 29th Lousberglauf truly lived up to its reputation as a cult event of the University Sports Center and represented another success of popular sports in Aachen. The unique atmosphere, colorful cast of runners and jubilant crowd came together to ensure that the even in its 29. iteration the Lousberglauf again outdid itself! The Final of the NRW UniLauf-Cup was also exciting until the end.

From hobby runners to performance athletes – when the University Sports Center calls out the Lousberglauf, whether as skiers equipped with sticks or in the outfit of one of the various institutes of Aachen’s universities, runners of all performance levels and walks of life heed the call. Once again, the Lousberglauf 2018 powered by STAWAG lived up to its reputation as a cult event. The men’s winner of the challenging 5’555m run was Martin Heuschen, from Team RWTH Aachen with a time of 17:58 minutes, while Julia Kümpers from Team RWTH won the women’s race by a clear margin with a time of 20:41 minutes. The mood of the roughly 2000 participants and the crowd was continuously high. Professor Rudolph Mathar, Prorector for Research and Structure, put particular emphasis on the togetherness fostered by the run – an event like the Lousberglauf brings people together. This is a sentiment shared by Professor Michael Wulf, Prorector for University Development at FH Aachen who goes further and sees the event as a “colorful city festival”. Peter Lynen, Head of the University Sports Center is pleased about the interest in the event and about the fact that sport has once again served to bring the two universities closer together and has attracted so much interest from Aachen’s population. The Lousberglauf powered by STAWAG is one of the flagship events of Aachen and the entire Euregio.

Following the penultimate stage of the UniLauf-Cup Cologne was in the lead with 40 points, closely followed by Aachen with 36. Ultimately, Aachen’s team was unable to capitalize on their home advantage at the Lousberglauf and overtake Cologne. However, they successfully managed to hold their ground and emerge from the UniLauf-Cup in second place.

Success Thanks to Traditional Cooperation

The Lousberglauf was born in the 80s as an initiative of the student inhabitants of the Rütscher Straße Towers with a smaller scope. Today, more than 30 years later, the Lousberglauf has developed into THE cult event of the region. Since 1990, the University Sports Center (HSZ) is joint organizer of the event, together with the residents of the towers. “Year for year it is becoming more and more difficult to find a sufficient number of volunteers, although in the end we have always been able to bring together a motivated team. Ultimately it’s about our ‘front garden’”, explains Matthias Wilhelm, Chief Coordinator of the Rütscher Straße Towers.
Since over 13 years now, STAWAG has been supporting the event as the title sponsor, which traditionally stocks the finish area with drinks and awards the prizes. STAWAG isn’t only active besides the race course, however. As is tradition, the company has again fielded its own team comprising of employees and customers from the Aachen. For Kirsten Haake, Corporate Communication at STAWAG, supporting the event has always been a joy, as, with over 100 volunteers, volunteering is in the foreground year for year.
Logistical support on site was provided by the Student Union of the RWTH. Importance can also be ascribed to the cooperation between the universities RWTH and FH, as well as the City of Aachen. Together, they ensured ideal route conditions on the day of the event.
Ramon Marställer, Head Coordinator of the Lousberglauf, is pleased that the Lousberglauf is as popular as ever, even after all these years. This can be credited to the great coordination of all those involved.