You Are Here: A Successful Day: Aachen’s Rowers take Bronze at the EUG in Coimbra

A Successful Day: Aachen’s Rowers take Bronze at the EUG in Coimbra 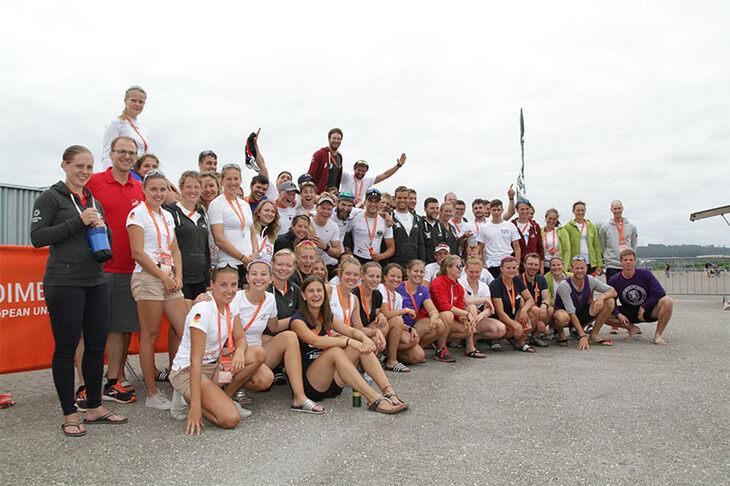 On the fifth day of competition on the regatta course of Montemor-o-Velho in Coimbra (Portugal), RWTH Aachen University’s men’s eight team took bronze in the European University Games in the rowing discipline. Overall, the German team secured 13 medals, placing second in the overall rating.

From July 15 to 28 the European University Games took place in Portugal’s Coimbra. There, Germany was represented by 400 participants in various disciplines against stiff international competition from other universities.

In rowing, following a strong performance, the men’s eight from the Institut für Textiltechnik of RWTH Aachen University with Petar Cetkovic, Michel Overlack, Lukas Klapheck, Sebastian Wellie, Tim Bauerle, Jonas Kell, Vincent Schmitz, Lovis Heinrich and Coxswain Gina Völsgen, took bronze. “It was a superb race and we were able to get as much out of ourselves as was possible” explains Michael Overlack. “We approached the whole thing in a relaxed manner and were very pleased to make it into the final and about how the race developed.”

Not only Aachen was successful in the pursuit of medals, however. Rowers like Leonie Neuhus and Mareike Adams from the University of Duisburg-Essen, who were already successful at the Olympic Games in Rio 2016, took Gold. The rowers Moritz Korthals and Simon Kramm from the University of Stuttgart, together with other internationally experienced rowers, were able to take silver. Thereby, the total number of medals had by the end of the event grown to the proud total of 13. In addition to their medal scores the rowers can be proud that they have all successfully progressed to the A-Finals of the competition.