You Are Here: WG Aachen Captures Titles at the DHM Judo 2018 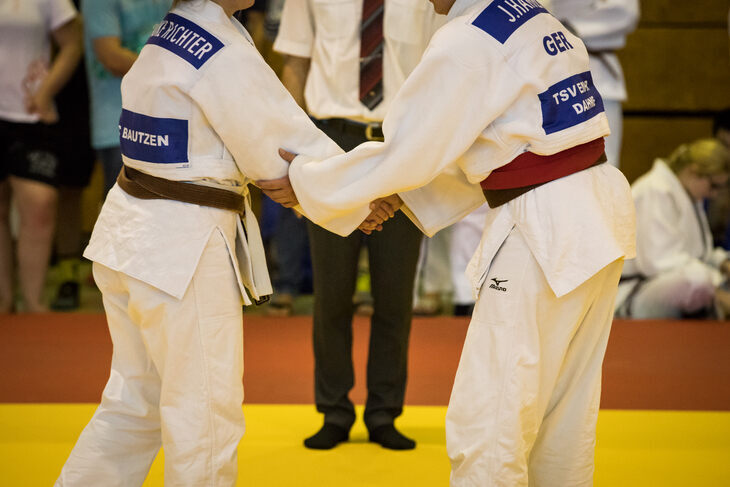 On the weekend, the DHM in Judo took place in the Neuköllner Straße sports hall. 450 athletes in white and blue suits took part with the goal of becoming German University Champion in Judo 2018. For this, Judoka from across Germany made their way to the imperial city.

Next to the single and team competitions, the yearly Newcomer’s Cup for newcomers and re-entrants to the sport took place. The exciting tournament was not something that the new rector Prof. Dr. Ulrich Rüdiger wanted to miss. He had himself been active in University Sports for many years and was happy to get to know RWTH Aachen University again with such an event.

This successful event proved very popular and went down smoothly. The Techniker Krankenkasse was also involved. As health partner, they supported the event, helping to show students how to live a healthy lifestyle.

The first successes in the competition could already be celebrated on Saturday in the single competition. Rahel Krause, who won the title of vice-champion at the European University Games in Coimbra, triumphed in the weight class +78kg, firmly taking 1. Place. Paul Schönbeck, winner of the Souverein Judocup Lommel (Belgium) was able to secure bronze in the top tier +100kg competition. In the evening, both of them, along with Judoka from other cities and weight classes, were celebrated at the After-Show-Party.

On Sunday, the Aachen competition group (WG) trounced the competition in the team competition and Newcomer’s Cup. The first women’s team placed behind Uni Leipzig and WG Braunschweig, securing bronze in the Newcomer’s Cup. It was even more exciting for the first and second men’s team of WG Aachen: In the Newcomer’s Cup they encountered each other in the final and after an exciting and tense fight the second team came out on top. Unfortunately, in the team competition, neither of the men’s teams were able to advance, as both teams had been relegated in the preliminaries by teams from Leipzig and Hannover.

Thanks to the great work of countless volunteers, the event went down without a hitch. By participating in the organization of the DHM Judo, volunteers also gained soft skills and experience which will serve them well in future.

Looking back, RWTH Aachen University is proud to have organized an event of this size and is looking forward to 2019 with great anticipation and fingers crossed for the opportunity to organize another DHM in Aachen.

All results can be seen on the website of the University Sports Center:
hochschulsport.rwth-aachen.de