You Are Here: European Sports Project comes to a Successful End at RWTH Aachen University 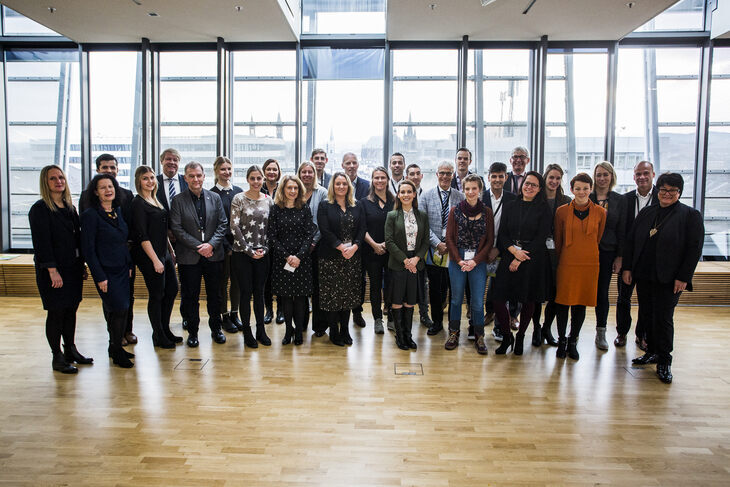 A unique pilot project came to an end today. After two years, everyone involved in the project „Active Campus Europe“ can look back at a successful process. Peter Lynen, project manager and initiator believes that it was of great importance to introduce to university sports students who due to experiences during their school times never found the right motivation. „Thanks to our vast range of sports programs, there's something for everyone." RWTH Aachen University believes in supporting the health of all its students. "This is combined with networking and sharing of experiences in practice”, explains Prof. Dr. Doris Klee, Vice-Rector for Human Resources Management and Development of RWTH Aachen University. The popular and well-known „Pausenexpress“ is part of the national project „INFORM“. Over 1000 members of RWTH Aachen University have actively participated in it. With projects like these it was possible to create a guide for other universities, „to encourage them to create and try out similar programs. The ‚Best Practice Handbook‘ collects the ideas of the all partic<ipating universities, allowing them to be shared with the other ACE universities and everybody else who is interested in motivating their students for a more active lifestyle.”

The ACE-project focused on students who had been largely inactive prior to the start of the 10-week project. Eva Fluck, a student at RWTH Aachen University, was a participant in the project and after the end of the 10 weeks she can say that she is now highly encouraged to move more in her daily life. A spur-off-the-moment decision brought her to the project, as well as the wish to finally change her daily routine for the better. She was very pleased about the instructors who spurred the participants to keep going and to connect their future with movement and sport.

However, also generally, one can say that the topic of movement has become highly important in today's society. That’s why the state chancellery of the federal state of North Rhine-Westphalia made the subject its own. „The ACE project is greatly enriching for NRW “, says Dr. Gerwin-Lutz Reinink from the Department of Sport and Volunteering in the State Chancellery of the federal state of North Rhine-Westphalia. It is of great importance to continuously motivate inactive, as well as fitness-obsessed people, to live a more active life“. The „Best Practice Handbook“ should help to reach this improvement, because it is “easily accessible for everyone“. Sabine Verheyen, Member of the European Parliament and person responsible for the Erasmus+-programs, emphasizes the importance of this project and thanks RWTH Aachen University for its initiative and implementation of the project. Next to the good achievements for health promotion, the networking dimension of the project helps to stem the tide of populism in Europe. It is valuable to have contacts that look after you and don't let you down when you have a loss of motivation or fear. Eckard Rhode, chairman of the National Conference for University Sports in NRW, thanked the RWTH for their responsibility and their willingness to lead the project.

„University Sport is more! “, he affirms, pointing out its role as an incubator in partnership with high-performance sports. There, athletes from NRW are shown to be very well represented and parallel career promotion is secure. With 5 participating universities NRW was very well represented in the project. After such success, the demand for continuing such a project is high. Peter Lynen is pleased to announce that „a request for a follow-up project is in sight”. Answering the question if NRW will support such a new project again, Prof. Dr. Klee and Dr. Reinink agreed with one voice “Yes!”.