You Are Here: Vibrant and Colorful Competition for the Thyssenkrupp-Trophy at the 31. Ice Hockey Uni-Cup

Vibrant and Colorful Competition for the Thyssenkrupp-Trophy at the 31. Ice Hockey Uni-Cup 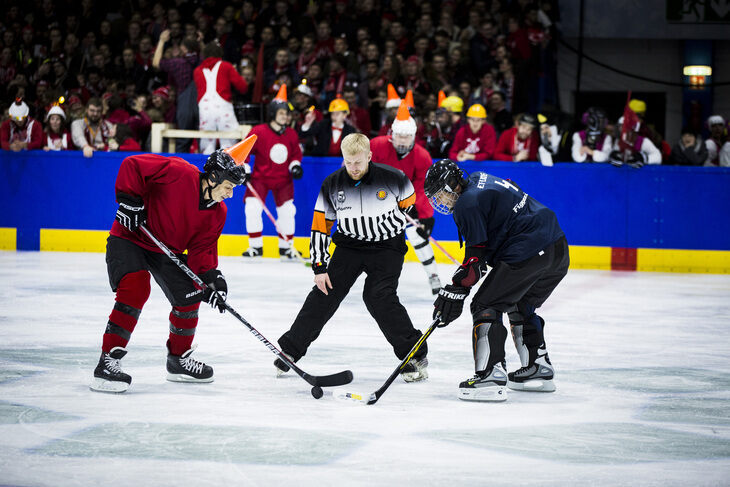 "Those who were here will certainly never forget the time as students", finds Professor Dr. Ulrich Rüdiger, Rector of RWTH Aachen University. It's his first Uni Cup, where the three student bodies (medicine, electrical engineering and mechanical engineering) fight for the Thyssenkrupp-Trophy and he is impressed by the motivation and commitment shown by the student bodies on the ice, as well as behind the scenes, to give their all in the hope of taking home the prize. Usually, it is important at RWTH to concentrate and achieve excellence, but the evening was an opportunity to unwind and stood for relaxed togetherness. "The EUC acts as an identification device, that gave people the opportunity to simply let it all out." It stands for a link between rectorate and students, whereby fun and a sense of togetherness are at the forefront of the event. This joyousness is also important to Peter Lynen, Head of the University Sports Center. "It is a cult event, where students and professors can experience the emotional side of RWTH as one team." The around 15 different sporting events a year are a unique aspect of Aachen, and part of what makes the city and University so attractive.

The Ice Hockey Uni-Cup, which celebrated its 30. Anniversary in 2017, was initiated by founding member Professor Dr. Christian Mittermayer. Year for year, it invites students to celebrate together. Furthermore, Peter Lynen praised the professionalism demonstrated by the amateurs, in spite of the time pressure of having to arrange it along their studies and free time. This appreciation is shared by Ramon Marställer, Event Coordinator of the HSZ, and directed towards high level shown by the ice hockey players, but mainly the cheerleaders.

However, next to the fun, enjoyment and collective celebration and cheer the ice hockey games don't get lost in the noise. At the end of the day, each of the three teams aims to take home the trophy for their own student body. It's a "matter of honor".

The home team of RWTH and FH Aachen, the "Ice-Emperors", competed this year against Zürich's team. Despite the 5:2 defeat of the Ice-Emperors by AEC Zürich, Carl Hemprich was visibly satisfied with the result. He underlined, that it was "a highlight, to be able to play before 3000 students." It is especially the friendships and team spirit, that make the Uni-Cup unforgettable. It would be a great change of pace from every day student stress, as all student bodies stressed.

Without the help of great partners, such an event would never have been possible. The University Sports Center can happily look back at many years of partnership with Thyssenkrupp, who for many years have stood behind the event as a sponsor. Stefan Cassel appeared visibly proud to support the event, as Thyssenkrupp sees itself mainly as an "emotional partner of the EUC". He's excited that the student are committed to it "with all their heart". This year, the HSZ can for the first time count the accounting and consulting firm Deloitte among its sponsors. Kerstin Wagner highlights the "great opportunity" it poses, to get in touch with students in a more relaxed atmosphere.

However, at the Uni-Cup, the charitable aspect is never lost from sight. The donation of roughly 1500 euros to the organisation "Right to Play" has a long tradition. The charity supports children in less privileged countries frolic and play to their hearts content. A new recipient of donations, this year, is Aachener Engel e.V.. Founded in 2005 by Martin Lücker, it accompanies Aachen residents who have fallen seriously ill, been abused or otherwise fallen into hardship, on their hard journeys. Additionally, disadvantaged children are given the opportunity take part in sports and are given access to free education.

The recipient charities reflect and represent the high relevance of fun and joy-de-vivre at the Ice Hockey Uni-Cup. This year, the Medical Strikers were again able to deicide the competition for themselves. After a close and exciting competition, they were able to overcome the mechanical engineers with 25 to 17 points. The electrical engineers were however the winners of everyone's hearts. They settled in third place with 8 points.

At the time of publication, the winners of the FuFah-Volunteering Prize have not yet been determined. The secret surrounding the winning cheerleaders was only exposed in the Starfish.