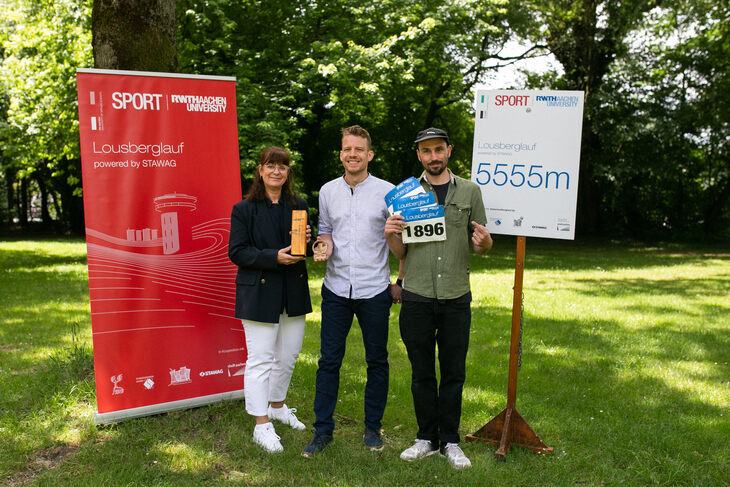 Last Event of the Summer Semester

As the final event of the summer semester, the annual popular Lousberglauf powered by STAWAG will take place on July 6. Runners are already looking forward to the athletic 5,555-meter challenge on the Teufelsberg, which climbs 250 meters. Ramon Marställer, event coordinator of the University Sports Center (HSZ), knows how significant the run is for the university and the city. The Lousberglauf powered by STAWAG is not just a sporting event, but a running festival that Aachen students celebrate together with the city.

Route Signage is in Place

Today, just under two weeks before the run, the route signs have already been put up. With a length of 5,555 meters, the route is relatively short, but it has a lot to offer with steep climbs and descents. Targeted training on the route can, therefore, be very important for successfully conquering the Teufelsberg. The special elevation profile and the angular routing make this run unique, notes Ramon Marställer.

The implementation of the event is only possible with the help of STAWAG. This is the 18th time that STAWAG is supporting the popular Lousberglauf powered by STAWAG: for example, all runners are supplied with water in the finish area. Kirsten Haacke, Corporate Communications STAWAG, is looking forward to the event with great pleasure. STAWAG is pleased to have been able to support such a cult event for so long. STAWAG wants to give the students in its student city of Aachen an opportunity to take part in a sporting event like this. STAWAG is also competing with its own running team and is grateful for the route signage they can use to train.

Cooperation with the City of Aachen

Another important long-term partner for Aachen’s running festival is the city of Aachen. The proactive and constructive work of the city offices, which are jointly responsible for the annual approval and conceptual design, ensures a smooth, logistical process. The cooperation with the city of Aachen, thus, ensures a safe and successful Lousberglauf powered by STAWAG. Especially after the pandemic break, it is important to be able to fall back on tried and tested procedures.

In the next few weeks, there are still some organizational points on the program: During an inspection with the city of Aachen, the route will be checked for safety aspects. More volunteers are being sought. Those interested can register on the university sports website.

Those who have not yet been able to secure one of the popular starting places for the Lousberglauf powered by STAWAG can do so via the university sports website.

The HSZ would like to thank all participants, the STAWAG, the city of Aachen, as well as the Studierendenwerk and is looking forward to organizing the Lousberglauf powered by STAWAG on the Teufelsberg in Aachen.

For more information, visit the Lousberglauf powered by STAWAG page.