You Are Here: Excitement at 33rd Lousberglauf Powered by STAWAG in Person: New Course Record for the Ladies!

Excitement at 33rd Lousberglauf Powered by STAWAG in Person: New Course Record for the Ladies! 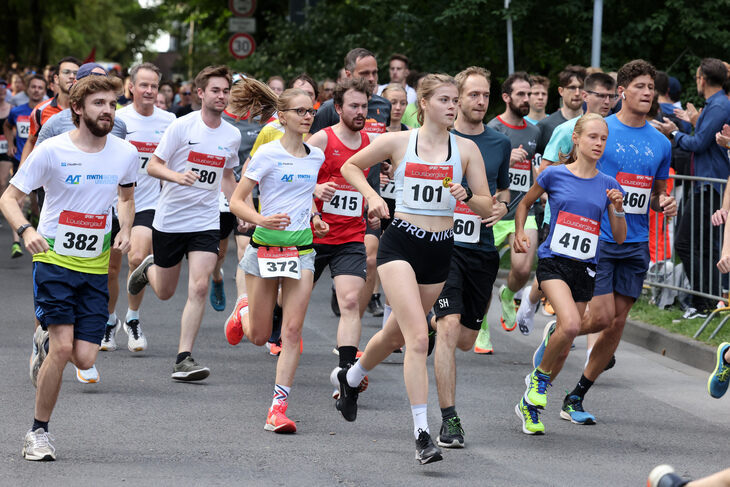 The 33rd Lousberglauf powered by STAWAG excited around 1,500 runners and spectators at the Teufelsberg in Aachen on July 6. In the women's category, a new course record was set after 11 years! The cult event organized by the RWTH Aachen University Sports Center (HSZ) and the residential towers in Rütscherstrasse provided a diverse mix of excitement, fun, and sweat. Fancy dressed athletes, a cheering audience as well as the incomparable atmosphere made this event a complete success!

For more than three decades, the Lousberglauf powered by STAWAG has been jointly organized by the HSZ and the Rütscherstraße residential towers. Running the Lousberglauf once - for many Aachen students, the sporting event has long become a fixed part of their study time. This year, the run finally lived up to its reputation as a cult run. Regardless of whether top athletes or amateur athletes, when the HSZ calls for the Lousberglauf, many running enthusiasts participate.

Importance of the Lousberglauf for Students

Today, the 1,500 enthusiastic participants ran together down the steep and edgy Lousberg. The run on the popular hill in Aachen also has great significance for Aachen's universities. The Lousberglauf has been a tradition for Aachen's students for a long time. It was nice that it could finally take place live and in color again. Prof. Dr. Malte Brettel, Prorector of the RWTH, is pleased about this. Professor Dr. Rosenkranz, Prorector for Studies and Teaching at FH Aachen, agrees. Students from all Aachen universities experience the Lousberglauf together and could, thus, exchange ideas with each other.

Peter Lynen, Head of the University Sports Center, is pleased about the numerous enthusiastic participants and guests. The Lousberglauf, he says, unites members of Aachen's universities from a wide variety of departments and institutes. Today we see many runners competing together in teams and taking part in the Lousberglauf together with friends. Sport has once again become a means of identification between the universities. The citizens of Aachen also take part in this celebration of running, he added.

Numerous Volunteers Through the Cooperation with the Residential Towers

Since 1989, the HSZ has been the organizer together with the residents of the towers. The event relies on numerous helping hands every year. Matthias Wilhelm, the main coordinator of the Rütscherstraße residential towers, was surprised by the willingness of the residents of the towers to help. Many of the students have never experienced the Lousberglauf like this before. And even though it seemed difficult at first to find so many volunteers, they still managed to put together an enthusiastic team of volunteers again this year.

The Studierendenwerk as a Partner at the Lousberglauf

Another important partner for the Lousberglauf is the Studierendenwerk of RWTH Aachen University. The Studierendenwerk supports with its infrastructure, namely the provision of the dormitory grounds. They also provide the runners with catering after their run. Ute von Drahten is thrilled to finally be able to support the run again on the Lousberg. She says she is particularly happy that after two years of the pandemic, the Lousberglauf could finally start again in person.

STAWAG as Title Sponsor and Cooperation Partner at the Lousberglauf

This is the 19th time that STAWAG has supported the major event as the title sponsor. In addition to helping along the running course, for example by serving water, STAWAG also had its own team of employees on the running track. Kirsten Haacke from STAWAG's Corporate Communications department is on fire. There is always a good atmosphere at this cult event. As a long-standing cooperation partner, they are happy to support the Lousberglauf every year and to promote student life in Aachen.

Final of the NRW UniLauf Cup

Traditionally, the Lousbgerlauf also represents the finale of the NRW Unilauf Cup. Before the last stage at the Lousberg, Dortmund was ahead with 54 points. In the end, the team from Cologne managed to take the victory and emerge as the proud winners of the NRW UniLauf Cup.

The Winners of the Lousberglauf

All other results and information can be found on the website of the HSZ.