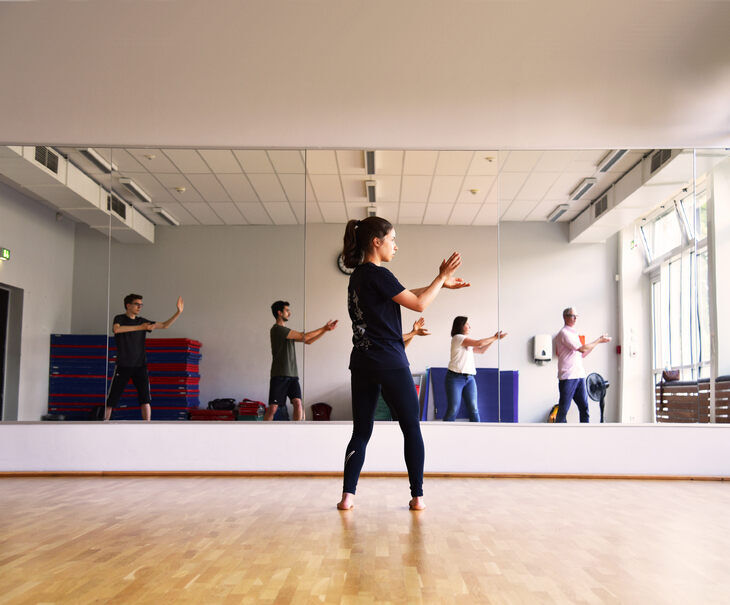 The RWTH University Sports Center (HSZ) presented the current sports and event program at a press conference on Wednesday. After an eventful summer, the winter semester continues with well known and popular events such as the Ice Hockey Uni-Cup and the University Sports Show. In addition, the German University Championships (DHM) in horseback riding will be held in Aachen.


With the beginning of the winter semester, the new registration period for the Aachen university sports courses also began. The demand was again very high. On the first day, there were already 10,000 registrations. Many courses were completely booked up within a few minutes. A representative survey on university sports in NRW from 2019 found that 88% of all students in Aachen are interested in sports. Peter Lynen, head of the HSZ pointed out the indispensability of expanding the sports facilities. He said that this creates an extreme excess demand because the HSZ can only reach 20% of all students with its current capacities. For all those who did not get a place in the course of their choice, there is individual appointments in many sports. One can book the appointment one day in advance.


The most popular sports include swimming, boxing, gymnastics, pilates and volleyball. Ulrich Weber, deputy director of the HSZ, emphasizes that the University Sports Center offers the last opportunity to learn about sports in an institutional setting. After school sports, many participants discover their enthusiasm for various sports at the University Sports Center. Ulrich Weber notes that there is a high demand for beginner courses in particular.


Especially in the winter semester, university sports are of great importance for all students of RWTH and FH who are new in Aachen. Doing sports together and building connections is an important part of student life. Juliana Kirchhoff emphasizes that university sports are even more important than usual this year. Not only the first-year students are new to Aachen, she says, but also all other students returning to the university after up to five online semesters.


In addition to the regular sports activities, exciting events are also taking place at the HSZ this semester. The DHM in horseback riding kicks things off from October 21 to 23. After a two year break, this is the first DHM to be held in Aachen. The organizer is the German University Sports Association (adh). Riders from all over Germany are expected to attend the DHM in the Albert Vahle Hall on the grounds of the CHIO.


After a two year break, the Ice Hockey Uni Cup will finally take place again on December 8. At this energetic and emotional event, the mechanical engineering, electrical engineering and medical faculties will compete against each other in the battle for the coveted thyssenkrupp Trophy. In addition to the exciting competitions, the teams will be cheered on by their cheerleaders and fans.


The HSZ is also looking forward to the remaining events of the winter semester: the two snow events, where newcomers to the slopes and experienced skiers and snowboarders will venture down the first runs of the winter semester together. Winter sports enthusiasts can also glide down the slopes during the extra tours this semester. These sports trips are run by the HSZ and accompanied by experienced ski and snowboard instructors. In February, the University Sports Center Show will take place, probably for the last time in the Königshügel sports hall.


This is because major changes are in store for the HSZ in the future: With the new construction of the Königshügel Sports Hall, the building is to be modernized and adapted to the needs of sports participants. The old hall is to be demolished in mid 2023. A new building should then be in place two years later. Peter Lynen emphasizes the importance of alternate spaces to be able to maintain the sports program during the reconstruction. The combination of extremely high demand, high relevance and the restrictions imposed by the construction site pose a particular challenge for the HSZ in the coming years. The situation should not worsen for students under any circumstances, he said. The student bodies, the rector, the building department and the HSZ of RWTH Aachen are communicating constructively on this.