You Are Here: Competition Excitement at the CHIO Grounds: The HSZ Invites to the DHM Riding in the Albert Vahle Hall!

Competition Excitement at the CHIO Grounds: The HSZ Invites to the DHM Riding in the Albert Vahle Hall! 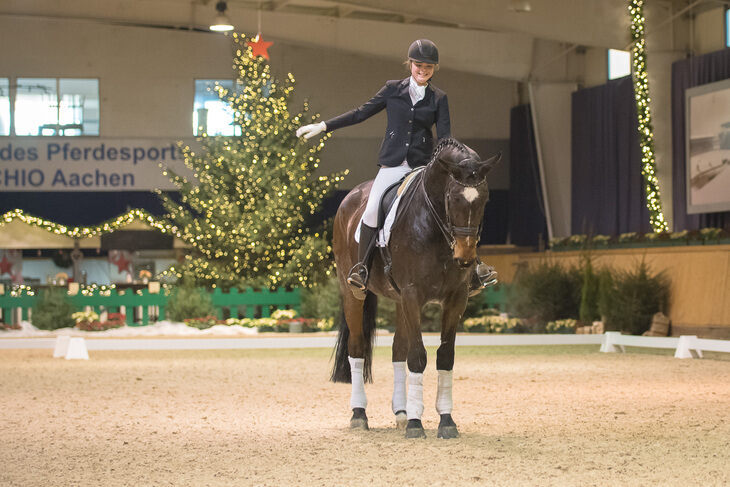 From October 21 to 23, the University Sports Center of RWTH Aachen University (HSZ) invites all riding enthusiasts to the German University Championships (DHM) in riding in the Albert Vahle Hall at the CHIO Aachen grounds. At the first DHM in Aachen for two years, a unique atmosphere, excitement and fair competition is expected.

The DHM Riding of the General University Sports Federation (adh) kicks off the eventful winter semester starting October 21. The participants compete with and against each other in the disciplines dressage and jumping with foreign horses. One individual rider will be competing for RWTH. With a planning period of only eight weeks, the HSZ organized the DHM in Aachen at short notice for all equestrian athletes from all over Germany. Previously, the originally planned organizer had dropped out.

CHU and DHM Equestrian will be combined

Equestrian sport has a high status in Aachen. Every year, the CHIO brings the elite of international equestrian athletes to Aachen. The HSZ also has its own equestrian event. The Concours Hippique Universitaire (CHU) is an annual horse show. The tournament is organized by the student riding group together with the HSZ. This year's CHU will be combined with the DHM and will be held as part of the DHM Riding.

Event schedule at the DHM Equestrian

With the opening ceremony on Friday morning, all teams as well as individual riders will be ceremoniously presented in their tournament attire. On Friday, the participants from all over Germany will compete against each other in the discipline dressage from the team dressage class A to the semi-final at M-level. On Saturday, the riders compete in the discipline jumping at A-level and up to the semi-final it increases to M-level. In the final on Sunday, the two best riders from dressage and jumping challenge one anoher at S-level. The three best teams will also compete against each other in a team dressage and a team jumping competition at elementary level. The award ceremony will take place from 15.30 after the final competitions.

All equestrian fans can enjoy the exciting competitions as spectators in the best atmosphere in the Albert Vahle Hall free of charge.

All further information is available on the HSZ website.