You Are Here: Excitement at the German University Championships Equestrian 2022 in Aachen

Excitement at the German University Championships Equestrian 2022 in Aachen 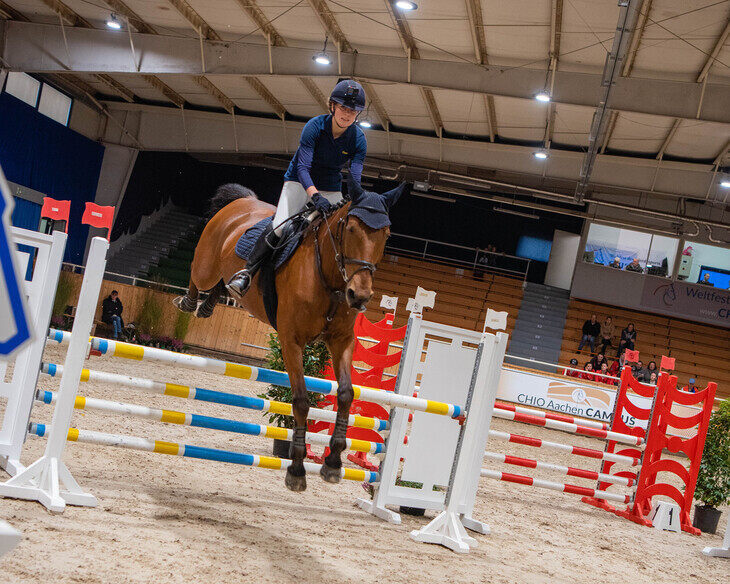 Rector at the final of the DHM


Last weekend, about 70 equestrian enthusiasts visited Aachen to participate in the German University Championship (DHM) Equestrian 2022. They were cheered on by their supporters. After RWTH Aachen University already hosted the World Championships in Student Equestrianism in 2012, the third DHM took place this weekend. On Sunday, the Rector of RWTH Aachen University, Prof. Dr. Ulrich Rüdiger, also watched the individual finals in jumping and dressage. Prof. Rüdiger was very impressed by the athletic performances of the participants. The DHM is the top event in university sports. The very best compete against each other.

In only eight weeks to the DHM


Only a few months ago, no one would have expected that the DHM Riding would take place in Aachen. After an originally scheduled organizer had dropped out, the RWTH University Sports Center (HSZ) agreed to take over the organization. With a preparatory period of only eight weeks, the team of the HSZ together with the student equestrian group succeeded in organizing an all-around successful tournament. Peter Lynen, head of the University Sports Center, complimented the student riding group. He said that the University Sports Center knows that it can rely on its student equestrian group. Through the combination of competence, tradition and experience, the HSZ was pleased to be given the opportunity to host the DHM.


Equestrian sports have a long tradition in Aachen. The enthusiasm of students for it is also evident in Aachen's university sports. Tina Miller from the Aachen student equestrian group reports a great interest and a lot of new members. A special feature of student equestrian sports is that participants compete on other people's horses. This is intended to make equestrian sport available to all interested parties, regardless of financial background. In addition, this method allows a better comparability of the participants who compete on the same horse. The DHM Riding is one of more than 50 German university championships organized by the General German University Sports Federation (adh) throughout Germany. Christoph Edeler, member of the adh board, is pleased about the HSZ's commitment and compliments the association solidarity among the adh members.

Events in the winter semester


The DHM was the first event held by the University Sports Center this winter semester. Juliana Kirchhoff, student body sports officer, emphasized the importance of events for students, especially after the Corona pandemic. Events, she says, contribute to the university's sense of identity. Especially in the commitment to a certain sport, students with the same interests find each other and can forge contacts.

The winners of the weekend


The event began on Friday morning with an opening ceremony. Afterwards, the participants competed against each other in the disciplines of dressage and jumping. In the finals on Sunday, the top two riders competed against each other in the advanced level dressage and show jumping disciplines. The three best teams competed in team dressage and team jumping in elementary class. At the following award ceremony, Julia Thöne from the University of Paderborn was honored for her performance in the dressage competition. In the jumping competition, Jasper Robiné for WG Darmstadt came out on top. In the combined classification, Celine Alexander for WG Dortmund took first place. The team classification was won by WG Hamburg for the third time in a row. Julia Kamp competed for Aachen as an individual. She made it to the second round of the jumping discipline and placed 10th.

More results will soon be available on our website.