You Are Here: Starting Signal for the Lousberglauf Digital powered by STAWAG 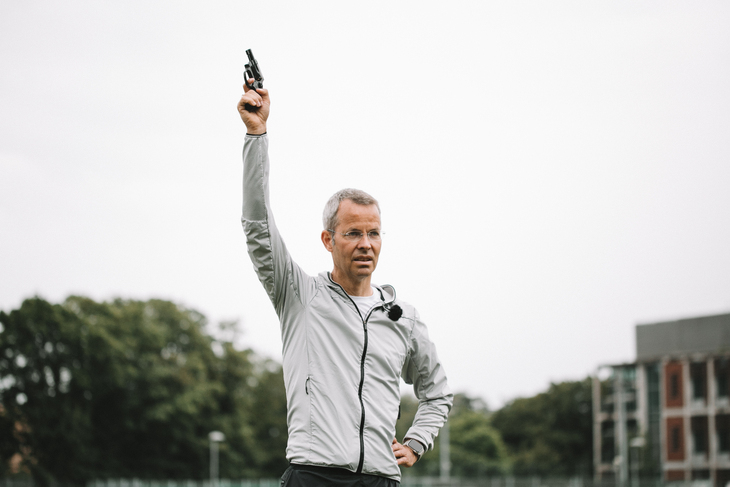 On Monday at 10am the time had come. Professor Doctor Malte Brettel gave the starting signal for the 32nd Lousberglauf powered by STAWAG. For the second time, the Lousberglauf takes place as a digital run. Participants now have one week until July 11 to cover the traditional distance of 5555 meters. At the subsequent digital press conference, all participants agreed that the Lousberglauf has what it takes to become a cult event in a digital format as well.

The Lousberglauf powered by STAWAG is now starting for the second time as a digital event. The digital version is also very popular. On the first day of registration, 300 participants have already signed up for the digital running event!

The physical Lousberglauf is a cult run with a cult route. The run stands for togetherness and represents a social experience. Anyone who likes to run, whether professional runners or hobby runners, can take part in the run. Having fun is always in the focus! Although these aspects are limited by the corona pandemic, it is even more important to develop and offer an alternative, said Peter Lynen, Head of the HSZ in the virtual press meeting on Monday.

Support by Rectorates of RWTH and FH

The rectorate also shows its support. Professor Malte Brettel, Vice-Rector at RWTH, not only gave the starting signal, but also ran the Lousberglauf Digital powered by STAWAG directly afterwards and achieved a fantastic running result. The event is a real hit, says Professor Brettel. The Lousberglauf stands for a joint meeting with different groups. It is a great event that brings the university together, which is why it is so important. That is why it is even more important to offer a digital alternative that continues to connect people.

The Lousberglauf is also very popular at the FH Aachen. Professor Rosenkranz, Vice-Rector at the FH, says that the Lousberglauf represents the cooperation between the two universities in sports and the promotion of university life in Aachen.

Both universities are very interested in creating encounters and exchanges between students through major events like the Lousberglauf Digital powered by STAWAG.

A central element of the Lousberglauf is the NRW UniLauf-Cup. This running series has been organized by the universities of Münster, Dortmund, Cologne and Aachen since 2003, with the final taking place in Aachen. So far, Team Aachen is in the lead, closely followed by Team Cologne. The winning team will be decided at the digital Lousberglauf this week.

STAWAG is a long-standing and loyal partner of the Lousberglauf powered by STAWAG. The event fascinates and attracts students in particular, and STAWAG is happy to support them, says Kirsten Haacke from Corporate Communications at STAWAG.

Usually, STAWAG supports the run by setting up route signs, having its own running team participate and distributing water. The digital version aims to create excitement through prizes, such as the new Geopainting Challenge.

The Geopainting Challenge is a side event that will take place for the first time this year. Here, participants plan their running route and use geodata to create a unique image on the map. The best and most creative geopainting picture wins a balloon ride with the STAWAG hot air balloon over Aachen. In addition to effort and fun, the creativity of the participants is encouraged this time. This is at the same time a guarantee for social togetherness, especially important in times of contact restrictions, says Peter Lynen.

Ms. Haacke emphasizes that the new conditions would offer a great encouragement to find fun in the digital version as well. The Lousberglauf, she said, has always been a nice event to get together and socialize alongside work. It was nice that despite the absence of the actual event, a great digital event could be set up.

More than 30 years ago, the Lousberglauf was started by the residents of the Rütscherstraße residential towers and the Studierendenwerk in cooperation with the University Sports Center. Since then, it has established itself as a cult event and is very popular among students and the citizens of Aachen. The Studierendenwerk runs the residential towers and the canteens. The terrain is made available so that such an event can take place. In times of Corona, communication is especially important. Students need to know that such a digital event is taking place. Support and, above all, the health of students is very important, says Mr. Böstel from Studierendenwerk Aachen.

Matthias Wilhelm is the main coordinator of the residential towers. He is happy about the digital version and emphasizes the great importance of the Lousberglauf powered by STAWAG for identity building and the community feeling of the towers. Residence life had to be completely scaled back and I notice that the residents do not know each other as well as before. Events such as the Lousberglauf powered by STAWAG can hopefully counteract this, says Matthias Wilhelm.

Due to the encouraging developments of the corona incidence rates, the HSZ could open the sports activities step by step. Besides the Digital Workouts, sports in person can again take place on the HSZ premises. In addition, the RWTH GYM has reopened and contact sports outdoor and indoor are offered again. The space has been revitalized. One notices how great the urge to exercise is, notes Peter Lynen.

Juliana Kirchhoff from the sports department describes the stressful situation in which students continue to find themselves. University sports are incredibly important at the moment, says Juliana Kirchhoff. After more than a year of studying at home, students are longing for social exchange and joint events.

With the gradual start of limited sports activities, the HSZ hopes to contribute to the normalization of social life at the university.

Of course, the offers are based on the current developments around the spread of the coronavirus as well as the recommendations of the responsible authorities.